When visiting Washington, DC, there is no shortage of running routes, both within the city and nearby in Virginia or Maryland. One of my favorites, and one that I make it a point to do as often as I can when I go there, is the route that I call the War Memorial Run. A 5-mile route that takes you from the U.S. Marine Corps War Memorial to the entrance of Arlington National Cemetery on Memorial Drive, across the Arlington Memorial Bridge, and through the Korean War, WWII, and Vietnam Veterans Memorials. It’s a decent route that is steeped in history and honor. 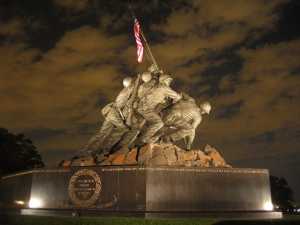 The morning I ran, it was a mile from my hotel to Arlington Ridge Park, so the U.S. Marine Corps War Memorial was a good place to start…and probably the best place if you ask a Marine. Standing just to the north of Arlington National Cemetery, it is an iconic statue that is immediately recognizable: Marines raising the American flag, as much an acknowledgment of the cost of victory in lives lost as it is a tribute to the bravery of those who made the ultimate sacrifice. Some things that the pictures of the memorial do not convey are the sheer size of the monument, towering above you as you run by, or the silent solemnity of the park in the pre-dawn darkness.

After leaving the Marine Corps War Memorial, the route skirts the edge of Arlington National Cemetery itself. You’ll see the neat and orderly headstones of those who served before going to their final resting place. I imagined their silent approval and encouragement as I ran by…at least at this part of the run. The route continues up to the entrance of the National Cemetery itself. The Women Veteran’s Memorial is brightly lit and impressive at the end of Memorial Avenue. Unfortunately for me, I was running far too early in the morning to visit properly. However, I made a slight detour to honor and acknowledge the service of those women I served with, many of them who were alongside me in the streets of Baghdad or the mountains of Afghanistan’s Kunar Valley.

Turning west, the route took me across the Arlington Memorial Bridge towards the National Mall, with two immense edifices honoring two men: Lincoln and Washington. But this route is taking us to memorials honoring many men and women.

I ran the route counterclockwise, which means that I visited the Korean War Memorial first. I always approach this memorial from the path in the rear, behind the statues. I imagine the patrol emerging from the relative protection of a grove of trees into the danger of the exposed landscape of open terrain. I ran along the Wall of Faces, thinking of what I consider one of the greatest tragedies for these Veterans: they are not able to visit all the battlefields of their youth. Many Vietnam Veterans make it a point to return to Vietnam and visit old battlefields, and the battlefields of Europe and the South Pacific are hallowed ground and history lessons for many. Even I, someday, could be able to return to Baghdad or Afghanistan. But for these heroes? They will never return to the Chosin Reservoir and never have an opportunity to return to a place of such significance to them. For many, this memorial remains the one place of remembrance for them.

Leaving the Korean War Memorial, the route took me along the reflecting pool toward the World War II Memorial. I pass the Washington, DC, WWI Memorial on my right, silently in the darkness. As I run into the WWII Memorial, I always make it a point to stop at the Wall of Stars. This is a wall of 4,048 stars, each star representing about 100 lives lost in WWII. Below the wall is the inscription, “The Price of Freedom.” Below the wall, between it and the inscription is a reflecting pool, which also shows a set of shimmering stars, one each for a hundred families, a hundred parents, a hundred siblings, spouses, or children. The sacrifices are not only counted in lives lost but lives forever changed. Leaving the memorial, I turn east towards my next goal. Often, I will take the time to find the hidden Kilroy graffiti, but not this morning…this run is plenty long enough in both time and distance!

Just like on the south side of the reflecting pool, there are a number of paths that will take me to the Vietnam Veterans Memorial. This time, I chose a route that brought me to it from behind the wall. You might never know that it’s there, coming in from that side—carved in the side of a hill, a dark and imposing mark on the landscape just like the war was a dark and imposing mark on the lives of those who were impacted by it, me included. My father and my uncles were in Vietnam before I was born. Still, I felt the impact for much of my childhood: my parent’s marriage, my father’s health (both physical and mental), the strange acknowledgment of this giant elephant in the room that all the adults in my life became very adept at ignoring.

When I visit the Wall, which I do, every chance I can get when I’m in DC, I’m always struck by the gradual immersion into the weight of history. It starts out small, at the level of your feet. The downhill path and the rising wall combine to give you a sense of plunging into a very silent, cold, dense pocket of water…and then, gradually, you emerge once again.

And then, it’s time to head back to where you started. My tour of the War Memorials may be complete, but my engagement with my brothers and sisters is not yet finished. As I return across the Arlington Memorial Bridge to skirt the edge of the National Cemetery once again, this time I’m not imagining silent appreciation and encouragement. Instead, I imagine (probably more accurately) jeers and catcalls. “Better you than me,” I imagine a laughing voice and another say, “What the heck are you running for, ya big dope?” And then one last one growled in the gravelly voice of a Drill Sergeant from 30 years ago, “Pick up the pace, meathead…my granny can run faster than you!”

It’s at precisely that point that the running app sounds in my ear; I’m 6 miles into a 5-mile run and still have more than a mile to go. I could stop and walk, right? Just for like a minute…and I’ll pick it up again, promise. But no, not here. Not within eyesight of countless headstones marching away into the darkness. Not this close to these heroes.

Passing the Marine Corps War Memorial once more, I arrive relatively soon back to my hotel, tired but satisfied. I ran for a good chunk of miles and spent about an hour or so of my day…but traveled thousands of miles and a century’s worth of years in my mind. A good run in the physical sense but a great run in a spiritual sense. Perhaps it’s a run that you might appreciate the next time you’re in DC.

This website uses cookies to improve your experience while you navigate through the site. The cookies that are categorized as necessary are stored on your browser as they are essential for the working of basic functionalities of the website. We also use third-party cookies that help us analyze and understand how you use this website. These cookies will be stored in your browser only with your consent. You also have the option to opt-out of these cookies. But opting out of some of these cookies may have an effect on your browsing experience.
Necessary Always Enabled
Necessary cookies are absolutely essential for the website to function properly. This category only includes cookies that ensures basic functionalities and security features of the website. These cookies do not store any personal information.
Non-necessary
Any cookies that may not be particularly necessary for the website to function and is used specifically to collect user personal data via analytics, ads, other embedded contents are termed as non-necessary cookies. It is mandatory to procure user consent prior to running these cookies on your website.
SAVE & ACCEPT