Transitioning service members and veterans face many different challenges, some of which are very similar to their civilian counterparts and others that are unique to the military. Issues such as child care, home maintenance, and household finance management are common to most families, but military spouses and family members often face other issues, such as feelings of isolation during long deployments, learning new skills to adapt to the absence of a family member, adjusting to a new circle of friends, and transitioning between an independent and codependent lifestyle. To add to this stress, military families must often readjust to their former lifestyles and roles upon the return of their once deployed service members. This type of experience is often met with mixed feelings of happiness and confusion about how the family should move forward after deployment.

My wife and I both served in the U.S. Marine Corps between the years of 1999 and 2005. We served in the same unit and deployed together to the Middle East in 2003, which gave us a common understanding of the stresses of military deployments. I ended active duty service in 2003, becoming a military dependent myself until my wife ended her tour of duty in 2005. In those 2 years I had the opportunity to experience what life was like for most military spouses, except that I also had the perspective of a service member myself. In her last year of service, my wife was stationed at the Marine Corps Base in Okinawa, Japan while I remained in Jacksonville, North Carolina. Both of us learned to cope with the lengthy separation by occupying ourselves with college courses, part-time jobs, or both. During this period of time, which turned out to be 18 months due to a stop-loss, I learned to adapt to a one-person household while also gaining a new circle of friends. These changes in both of our lives made the transition back to a two-person household more difficult because we had discover new interests over the year-and-a-half and had to essentially rediscover how to interact with each other again when we were reunited.

I believe that this period of time was critical in my successful transition from the military to civilian world because I lived in the vicinity of the Marine Corps base. Unlike most service members who typically move back to their home states, I was able to reside in and stay connected to a community that understood the military very well. This also helped with my understanding what my wife experienced during her overseas tour and how we should readjust to one another. The community of people who understood deployment cycles and smooth transitions helped ease both of us back into a new normal. 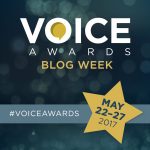 In honor of National Military Appreciation Month and the Month of the Military Caregiver, the Substance Abuse and Mental Health Administration’s (SAMHSA’s) Voice Awards and the Elizabeth Dole Foundation’s Hidden Heroes are co-hosting a Blog Week to support America’s service members, veterans, and their families (SMVF). Each day from May 22 to May 27, members of SAMHSA’s SMVF Technical Assistance Center, operated by Policy Research Associates, Inc., will post a blog responding to the Blog Week’s prompts. Monday will focus on Families and Caregivers, Tuesday will focus on Individuals and Families, Wednesday will focus on Entertainment, Thursday will focus on Communities, Friday will focus on Organizations, and Saturday will focus on Memorial Day. Check the PRA blog daily for new posts and follow the conversation on Twitter using the hashtag #VoiceAwards.