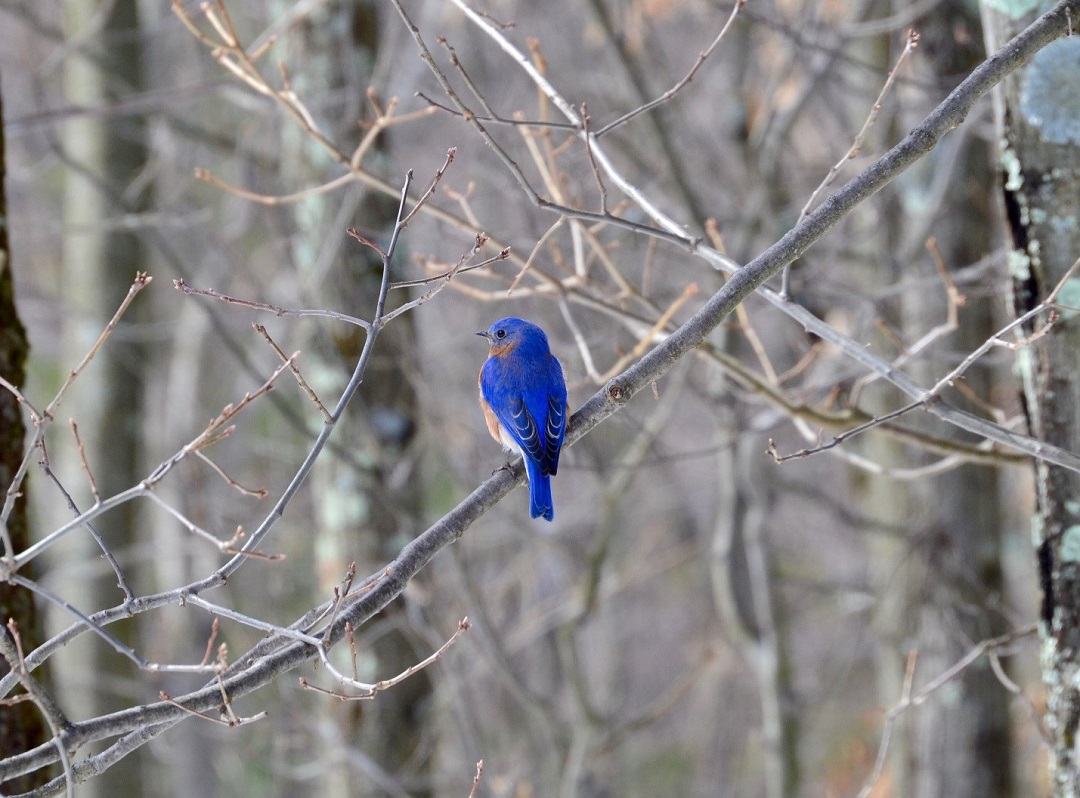 Bluebird of Happiness in Residence

I love bluebirds. A year ago I’d never seen one before, but ever since a small flock of them showed up in the eastern redcedars right outside my cabin last winter I’ve been obsessed. There is no collective noun for eastern bluebirds—no gaggle or murder or exultation—because they don’t typically travel in large groups. During the territorial mating season, they’re alone or in pairs, though as hatchlings fledge and mature close to home, a family might stay together through the fall and winter. We had one such small family of five for neighbors, often seen in a nearby hickory tree, perched on a branch and puffed up for warmth, cute as fluffy buttons.

A few decades ago, human activity had left bluebirds thin in the trees. People introduced invasive competitors for housing—house sparrows to control pests, and starlings because Shakespeare—and compounded the problem by removing a lot of housing stock: old trees with hollows suitable for bluebird nesting. Things turned around when people started a bluebird housing project of sorts, creating birdhouses with doors sized to deny starlings entry.

Four years ago my husband and I built a small cabin, and it turns out, by leaving a small part of it unfinished, we also built a birdhouse. In the early-winter rush to finish minor details, like the exterior walls, we didn’t place a wooden cap on one section of the structural insulation panels that formed our roof. Last year some feathered thing took notice, burrowed in, and set up house.

As spring approached last year, our neighborhood bluebirds went their seasonal ways, leaving a lone male in the eastern redcedars around the cabin. During mating season it falls to the male to locate and protect a nesting site, then hop around and sing for all he’s worth until a female decides to move in. As I walked into the cabin one day, wondering what patch of real estate our male had chosen, I got my answer when he flew out of the hollow in our roof. A week later, I saw a female do the same. Now? I’m watching for fledglings.

Bluebirds in the Trees