Unkempt (adjective): (especially of a person) having an untidy or disheveled appearance
“They were unwashed and unkempt.”

I became aware of my aversion to the word unkempt while working as an intern in a women’s prison. Upon arrival, Black women with locs or long braids were forced to cut their hair. I would read in their charts that these women were described as having “hair that was unkempt” or “unkempt kinky hair.” Very rarely was the word used to describe mental state—mainly just to describe hair.

As I progressed in my career, I notice that the word had not. I have seen the word in institutional files and agency case notes to describe many conditions of hair that adorn heads of Black and brown women. The words in charts for white women read, “uncombed,” “matted,” “soiled with debris,” providing an explanation for the condition of their hair. Black and brown women were just “unkempt.” A code word for Black women’s hair in its natural state. So yeah, I have an extreme aversion to the word “unkempt.” Why? Because even in 2020, Black women are the only humans that need laws protecting them to wear their hair in its natural state.

For many Black women, the attempt to be “enough” often played out in our hair. Historically, Black hair was a conversation of control and suppression by oppressors. It was not uncommon for African women brought to this country to be forced to shave their heads upon arrival. When their hair grew back, the tresses that once identified their tribes, their marital status, their socioeconomic stature, their family were viewed as “nappy” at best. Today those terms are traded for “unkempt,” “difficult,” “kinky,” or for the real micro aggressors out there, “interesting.”

Just like the legal system that contributed to the continued trauma of those incarcerated women who screamed and cried or sat in defiant silence while they watched their hair drop to the ground to be picked up and discarded, Black women in professional work settings have endured similar trauma both emotionally and physically in an effort to absorb this trauma and become free enough. Chemical relaxers and weaves that cause irreversible scalp damage—in an effort to somehow become at least the Black women with hair that would not be threatening, unprofessional, or unkempt. Billions of dollars spent on hair care products by Black women to companies that never give back to Black communities. Black women rarely get to see themselves as a standard of beauty in their natural state. We all know that trauma on trauma never works out well.

Now imagine not being hired or asked to “do something more manageable to your hair” while on the job or being able to fight in wars as women but encouraged not to wear your natural hair while doing so. From the military to grade school, Black women and girls have had their tresses under attack. Unlike past years, the law is responding.

The CROWN Act, which stands for “Creating a Respectful and Open World for Natural Hair,” is a law that prohibits race-based hair discrimination, which is the denial of employment and educational opportunities because of hair texture or protective hairstyles.

While the CROWN Act has passed at the state level in only seven states. On September 22, 2020, the U.S. House of Representatives passed the bill at the federal level—if approved by Senate, and the president, its protections would automatically apply to all 50 states.

(Side note: If you have never had a federal law that protects your ability to live in your natural state, that’s privilege.) 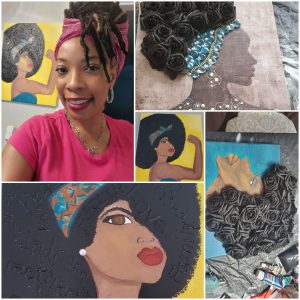 Black hair is the crown that was stripped from American consciousness. Braiding wasn’t just a hairstyle in ancient Africa, to Black slaves, or even to women in the African diaspora today. From box braids to Bantu knots, African women saved their children by hiding food in their braids so that they could endure chattel slavery. African American women braided maps to freedom in their hair to signal where and when an escape was to be executed. Black women celebrated their strength and political will in huge afros; Black and proud. From Senegalese twists to locs and afros, Black women use their hair to communicate with the world, and there is nothing “unkempt” about it. It is a source of strength and a symbol of creativity that should be shared with the world.

I celebrate the resiliency of Black women in my art. My paintings highlight the versatility, the creativity, and the power that Black hair holds. My intent is to remind Black women who struggle with all the negative self-talk because of what they have been told, restricted from, or denied because of what they look like that they are more than enough.

Myself, included. Now, let me go fix my crown.