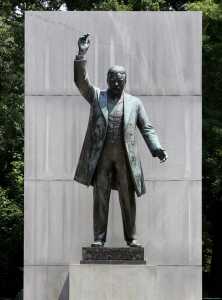 Have you ever crossed the Theodore Roosevelt Bridge from Arlington, Virginia, into DC and seen a giant island in the middle of the Potomac? If you’ve ever wondered what was down there, that’s Theodore Roosevelt Island. In a city of monuments to great leaders, it’s somewhat fitting that the memorial to America’s 26th President, Cowboy, Cavalryman, and recipient of both the Congressional Medal of Honor and the Nobel Peace Prize is placed somewhere that it takes effort to get to. It’s not easily accessible; it’s closed to vehicle traffic, and the only entrance to the parking lot is from the northbound lanes of the George Washington Parkway.

Being in Arlington for a couple of days and looking for a good route for a weekly run, I realized that this would be a great opportunity to take a trip down to the island that I’ve always wanted to visit. From the hotel, it was a mile and a half through the streets of Rosslyn, VA, to get down to the island. Urban running…sidewalks, crosswalks, keeping an eye out for cars and bikes. Mostly downhill, which made for a nice warmup and first-mile split, but as we know, what goes down must go up to get back to where you started!

Once you get down to Gateway Park, you’re able to pick up the Custis Trail, which connects to the Mount Vernon trail and carries you down to the Theodore Roosevelt Island Pedestrian Bridge. The trails are well-marked and well-lit, mostly even with more downhills as you get closer to the Potomac. If you’re lucky, you may even be surprised to see a DC deer…who seemed just as surprised to see me. As you follow the trail along the GW Parkway, you’ll see the pedestrian bridge on your left and cross over to the island.

Theodore Roosevelt Island is, again fittingly, a wild landscape in the middle of the urban infrastructure. According to the National Park Service, the island was specifically designed to replicate a range of habitats, from low-lying swamp land to forests and woods. My goal the morning of the run was to run the perimeter of the island on the Swamp Trail.

A bad name for a good trail, the route is not swampy at all. Most of it is crushed gravel and dirt, with a boardwalk running the length of the island opposite Georgetown on the other bank of the Potomac. In keeping with the natural settings, the route is not lit, so a daylight run or high-powered flashlight is a must. The trail is the longest loop on the island, running 1.5 miles…unless, like me, you decide to take a detour to the center of the island to check out the giant Teddy Roosevelt statue in the memorial plaza. It’s worth a detour—running into the plaza, it looks like Teddy’s giving you a high-five in tribute to your adventurousness. But then, if you try to take a route back to the perimeter loop, get turned around a bit, then take what is a clearly marked path on your mapping app but turns out to be a mad scramble through the woods in the dark, you tack on a little bit of distance. I could hear the spirit of ol’ TR himself cheering me on as I plunged into the wood and laughing heartily as I sprawled in the dirt because I wasn’t watching where I was going. Teddy was famous for mad scrambles across DC himself, so the tumble and fall would have been right up his alley…as would have been picking himself up, dusting himself off, and getting on with the business at hand. 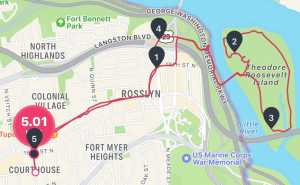 After getting back on track, a clockwise route around the island takes you through some nice scenery and right up to the foot of the Theodore Roosevelt Bridge before bringing you back to the pedestrian bridge. A short run back to your hotel…again, what was a nice downhill run at the beginning of your five-mile stretch is exactly the opposite at the end…and you’ve checked off a good run to a lesser-known DC Memorial. Make sure you hit the ice machine at the end of the hall to take care of that lump on your shin. ;)