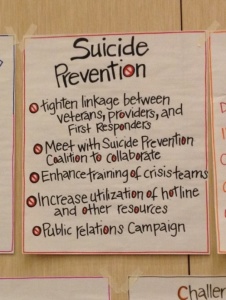 The month of September has been designated suicide prevention and awareness month.  To support the goals and ideals of this national campaign, we need to focus on the suicide epidemic impacting our Nation’s service members, veterans, and their families.

Historically, suicide rates have been lower for the military.  For the first time since 2008, military rates exceeded that of the national average and have continued to increase at unprecedented rates across all branches of service.  Everyday approximately 18 service members and veterans die by suicide.  This equates to one person’s life lost to suicide every 80 minutes.  In response to the high rates of suicide in the military, President Obama released an Executive Order August 31, 2012, outlining a directive to increase access to mental health and substance abuse services and reducing suicides among our military population.  Central to the plan is the need for increased cross-system collaboration and enhanced partnerships among civilian and military sectors.  Community involvement is also vital to increasing outreach, engagement, and access to behavioral health services.

As many service members and veterans are unable to, or choose not to, access services through the VA, community providers often become front-line players in the battle to reduce suicide rates.   As community members, it is imperative that we recognize the signs of suicidal ideation and increase our knowledge on how to access services for those who are in crisis.  We need to educate each other on how to recognize risk factors for suicide such as: chronic pain; feelings of guilt, anger, or shame; exposure to trauma; a sense of hopelessness; relationship problems; financial problems; and post-traumatic stress. We also need to ensure that those who need assistance know where to access timely care.  Providing access to integrated, effective, and culturally competent behavioral health services plays a pivotal role in the prevention of suicides.

As September comes to a close, it is important to remember that although Suicide Prevention and Awareness Month is almost over, it is critical that we continue to raise awareness of the impact of suicide on service members, veterans, and their families.  Service members and veterans have sacrificed a lot to protect our freedom and our country.  Now it is time to serve them.  The high rates of suicide across military populations are unacceptable.  We need to do better to reduce these rates and provide the support service members and veterans deserve.

Learn more about the President’s Executive Order.  If you or someone you know is in crisis, please call the Veterans Crisis line at 1-800-273-8255 (press 1) or visit http://www.veteranscrisisline.net/.