Mountains, like goals, tend to loom larger the closer you get to them. This is especially true if the mountain is one you see in the distance frequently, and the goal is a long-standing one that you may have given up on.

One of the many things I appreciate about my community, Colorado Springs, Colorado, is the mountains that can be seen just to the west of the city. Dominating the entire range is one that is internationally famous—Pikes Peak; America’s Mountain. The second most recognizable mountain? The long, broad southernmost peak, known as Cheyenne Mountain. Topping out at over 9,000 feet, the mountain is recognizable for its shape, the cluster of antennas on top of the mountain that support everything from the phone in my pocket to satellites in space, and the various structures around it. The world-famous Broadmoor resort is nestled at the foot of the mountain, and it boasts the country’s only mountainside zoo. It’s also the location of the North American Aerospace Defense Command (NORAD): a military installation literally carved into the mountain, made famous by movies such as Wargames and Stargate SG-1. In those disaster movies, what undisclosed location do members of the government go to in Colorado? Cheyenne Mountain.

South end of Cheyenne Mountain from the trailhead

My part of the story comes in 10 years ago, as I made it a goal to hike to every peak in Colorado Springs above 9,000 feet. I made a pretty good job of it, too, including climbing Cheyenne Mountain using a back-country trail to the “true” summit several miles away from the east-facing side of the mountain…but the front of the mountain remained unconquered. I knew they were building the Dixon Trail, but by the time I retired from the Army in 2014, it still remained a vague “someday” goal. In the meantime, injuries, a new career, age, and the loss of activity that many Veterans experience after leaving the military combined to push the goal of hiking the Dixon Trail to the “wishful thinking” category…until recently.

My physical health and wellness came into stark focus during the COVID-19 pandemic. One day, I stepped on the scale and found that I was closer to 300 pounds than I had ever been in my life. In June of 2021, I weighed in at 296 pounds…and for a former Paratrooper who used to ruck and run with the best of them, that was a hard reality to come to terms with. I decided to make a lifestyle change and started a weight loss goal plan. Over the course of a year, I successfully lost over 80 pounds, and 1 year later, I celebrated the accomplishment by dusting off an old goal and checking it off the list.

Early on the morning of my scheduled hike, I paused at a park near my house to take a picture of 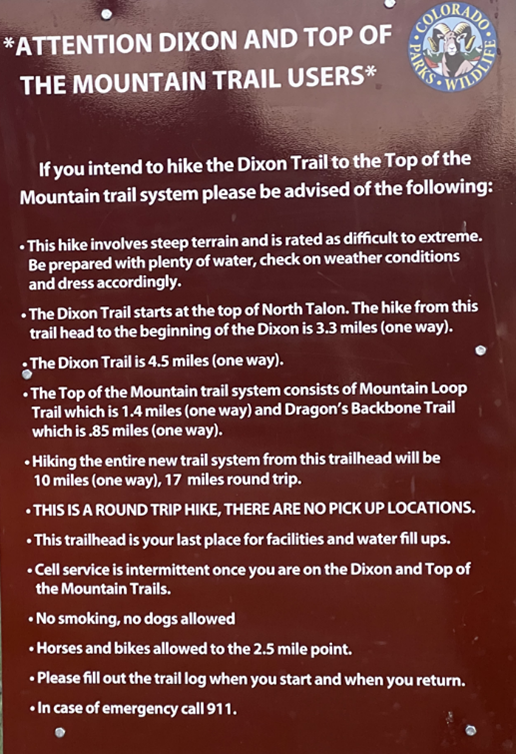 the mountain I would soon be standing on top of. Again, the closer I got, the larger it loomed. The Dixon Trail travels about 3 miles through the meadows and foothills at the base of the mountain before starting the steep climb on the south end. At the trailhead, the State Park has erected a sign warning hikers about what exactly they are in for. When the trail you’re about to hike comes with a 12-point warning, you know you’re in for a heck of a day.

Cheyenne Mountain State Park is a 2,700-acre park home to a wide range of plants and animals and over 20 trails totaling nearly 28 miles throughout the park. On any given day, hikers can encounter a range of wildlife, from deer and butterflies to snakes and bears. Thankfully, on that day, my wildlife encounters were on the benign end of the spectrum…several deer munching on some bushes and countless rabbits scampering away from my steady progress.

After the 3-mile hike, I finally arrived at the trailhead that would take me further back and farther up. The 4.5-mile one-way Dixon Trail is rated difficult to extreme with an elevation gain of over 2,500 feet, a steep grade, uneven terrain, and numerous switchbacks. Even in the early part of the day, the weather was warm, and the lack of wind provided no relief. However, the goal was still to be met, and once started, turning back was not an option!

The mountains, like the ocean, are vast and hold numerous secrets. One of them, which I had heard of but never seen, was the remains of an airplane crash in 1957. A two-person single-engine plane on a training flight from Illinois to 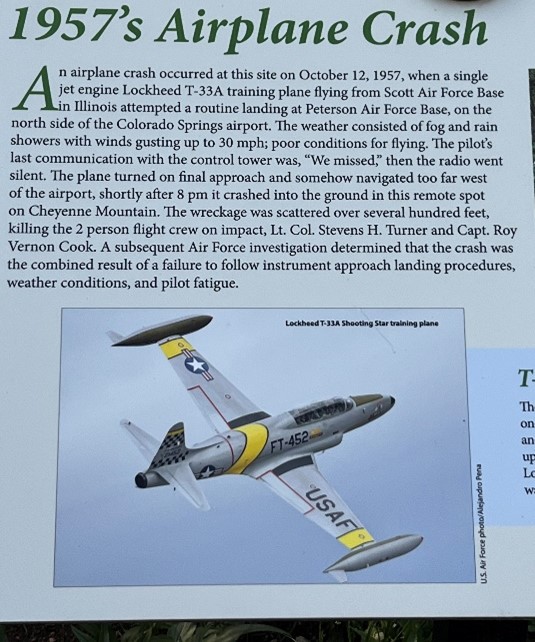 Colorado missed one of the local Air Force bases in bad weather and low visibility. It crashed in a remote location on the side of Cheyenne Mountain. The wreckage from the crash can still be seen to this day and is marked with a commemorative sign telling the tragic story of the event. More currently relevant, however, was the knowledge that the crash site was situated within reach of the goal—the top of the mountain.

After several hours, the goal was achieved. I scrambled up to the top of the rocks overlooking the city of Colorado Springs below. I took the time to reflect on the accomplishment—not only of that day but of the previous year and, indeed, the previous decade. I had achieved a goal that I thought I had given up on, one that I had resigned myself to not achieving—but the goal, like the mountain, remained. Still to be attempted, still to be completed; and completed it was.

Then it was time to do it all over again…only in the reverse.