Restoration to Sanity: A Journey to Restore 135 Year Old Home!

This blog article, the first in a three part series, is all about the recent efforts my wife and I have taken to restore a 135 year old home in the small Saratoga County Village of Waterford, NY.

These days the number of TV shows, websites and blogs about restoring homes are countless. Right up there with people leaving cities to buy small farms and butter churning parties, restoring homes seems to be the thing to do these days.

Here is what makes this story a little different: Besides some basic knowledge and a natural ability to build things that my wife inherited from her master carpenter father – we really had no idea what we were doing!

Don’t get me wrong, last winter I put together an end table I bought from Target (note: my wife told me not to tell people I refer to that as building something) and I can screw in a light bulb, but other than that, this was a shot in the dark.

We liked the cute clapboard siding house with aging wood shutters, but we had no idea what we were in store for.

The house was beautiful but had not been worked on in many years. The nice screened-in porch looked good from afar, but closer inspection showed that the screens looked like Swiss cheese and rose bushes – outside had actually grown into the wood and actually became a part of the structure!

The outside of the house looked like it needed a little paint, but we soon found out that it really needed more. I nicked the corner of the house while mowing the lawn one day and a whole piece of the house actually fell off!

With that said, we have really rolled up our sleeves and gone to work.

In general the ‘separation of labor’ has my wife working on the walls and me on the floors.

The walls in most of the house were covered with hideous wallpaper. This was pretty simple we figured. Remove the wallpaper, patch a little and then paint.

The issue came when we first tried to remove some of the paper. We quickly learned that the paper was what was actually holding the wall together in most places!

My wife is a true artist with drywall and plastering tools. Among other things, she learned that you can make textured walls with joint compound mixed with water based Killz. After trying a number of different techniques she settled on using a stippling brush to make a beautiful textured surface. That was what we did on the walls in the spare room and the ceiling in the master bedroom. The rest was her dedication, hard work, and patience through hours and hours of making the walls very smooth. In some places we had to hang some dry wall and then seamlessly blend them.

Upstairs we decided to pull up the carpet, two layers of linoleum and a layer of 1935 Troy Record Newspapers to see what was beneath them. To our surprise we found original fir floors.  Being the overachieving masochists we are, we decided to sand and then refinish them instead of covering them up.

After learning that we could not use the heavy duty rented floor sanders you can get at Lowes or Home Depot because the boards were so uneven, we purchased this little belt sander and away I went. I did a lot of research about how to go about this, and with some trial and error, sweat (heat wave) and a little bit of blood (splinters), we had the floors rough sanded.

One of the issues we had to deal with was the fact that the floors had huge cracks between them. Besides losing heat, this means that anything spilled on the floor would go right to the ceiling in the room below. It was hard to find something to seal the cracks since wood expands and contracts with heat and cold. We were able to find this Marine Calk from 3M that is actually used to seal the hulls on boats and this has worked amazingly. We now have the floors completely rough sanded and the cracks filled.

In addition to the things we have done on the inside thus far, we have created raised vegetable garden beds where we have already harvested green beans, lettuce, and cucumbers. We also planted raspberry bushes, blueberry bushes, rose bushes, and a number of other perennials to make a mixed floral and edible backyard space. Additionally, we painted the old, dirty-white shed in the back a nice barn-red.

Here are some pictures of the work we have done – the next part of the series we will update everyone on the walls, putting poly on the wood floors, and getting the house ready enough to move in! 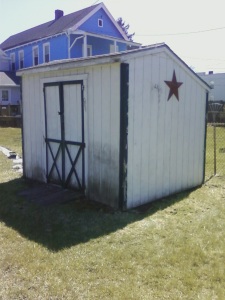 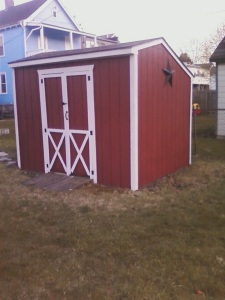 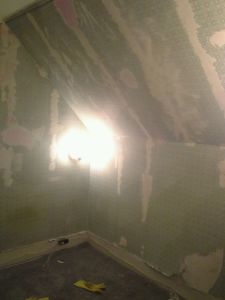 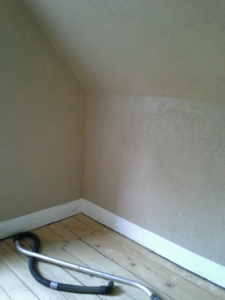