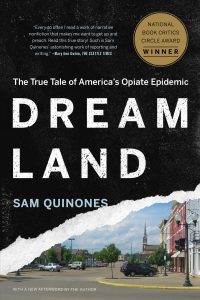 n your 2015 book Dreamland, you describe a revolution in drug marketing and trafficking. Since the book’s publication 5 years ago, you have traveled to small towns across the country. What do you see happening there, and what does it say about the future of the opioid epidemic?

I would say there is depressing news and exhilarating news all across the country. On the one hand, you see the spread of fentanyl taking the place of heroin, which took the place of pain pills to some degree. The pills were deadly. Heroin turned out to be even more so, and then fentanyl even more than that.

You are also seeing now an explosion in the supply of cheap and potent methamphetamine coming out of Mexico, and that has been devastating for many, many towns around the country. And the problem with meth is that there are no medications proven to effectively treat methamphetamine addiction, as there are with opioids.

Not so easy to see, but still very much in evidence if you look, is an exciting response by many communities across the country that are not just sitting around, haplessly throwing up their hands and saying, “Well, we can’t do anything about this.” They are forming groups that are bringing together a lot of different voices to attack this problem.

It’s no longer just police, probation, parole, jail, and judges. It’s also clergy. It’s the Kiwanis Club. It’s the Chamber of Commerce. It’s the PTA, and school officials, and parents, and people in recovery from addiction, and doctors, and hospital administrators, and mental health professionals. And they’re trying new things.

If you buy my idea that the root cause of this national epidemic of addiction is a destruction of community and our own isolation in American culture, then to see people come together and learn how to work together is exhilarating to watch. So, I’ve seen both of those aspects. The negative panorama and an optimistic one, as well.

You have said that much of the innovation in dealing with the opioid epidemic has come from law enforcement. What is their role, and what would you like to see more of?

In decades past, law enforcement was the lone responder when it came to our national drug problems, but that has not really worked, and I don’t see it ever working. What you’re seeing now is the wider justice system opening itself to a wide range of different ideas. And one of the most optimistic things I’ve seen is a new way of doing jail and prison. I think that’s extraordinarily important because jail has always been a major perpetuator of crime, addiction, and mental illness. People get out and go right back to whatever they were doing beforehand. Now what you’re seeing is that they’ve established recovery pods in many jails and prisons, so people spend their days working on their recovery in a variety of ways—classes, 12-step groups, etc. If we change incarceration so that it becomes a positive influence on crime, addiction, and mental illness, then I suspect we would change America.

What role do you see for treatment providers and recovery support services in helping stem the tide of this epidemic?

These groups have extraordinarily important roles, and they need to collaborate with one another. Frequently, I think there are stumbling blocks to them getting along, and it stems in part from how you view addiction. Addiction counselors tend to focus their efforts on addiction first and then an emphasis on mental illness grows from that. Mental health professionals tend to focus their efforts on mental health treatment first and then an emphasis on addiction grows from that. And they also tend to be budgeted so that one gains and the other loses, so they view the other as a rival instead of an ally.

I also think it’s important to understand that we cannot arrest our way out of this. Neither can we treat our way out of this. There is no such thing as one solution to this problem. There has to be a multifaceted approach among criminal justice, treatment, mental health, foster care, and public health agencies. All of these and more have a profound role, and they each need to understand that their role works best when they work with these other groups.

You released a young adult version of Dreamland and are working on a follow-up book. What has working on this story meant to you personally and professionally?

It’s consumed my professional life and a lot of my personal life, too. It’s what I talk about around the house, and it’s something I think about all the time. I have no addiction in my family, so I have no personal stake in the story. I just saw a story that nobody was telling fully, and I thought needed to be told. To the extent that the story is casting the country in a negative light, it really does depress me from time to time. This epidemic is saying that we got away from what really mattered to us as human beings, which is human connection and community.

When I was in the middle of writing the book, I was convinced that nobody would ever read it because I could not find people who wanted to talk about it. Everyone was quiet, and silent, and ashamed that they had a loved one experiencing addiction. Now it’s being discussed. Now people are stepping out. Now the obituaries tell the truth. To the extent that writing the book has shown me what’s great about the country, it’s exciting. It’s a wonderful thing to see happen.