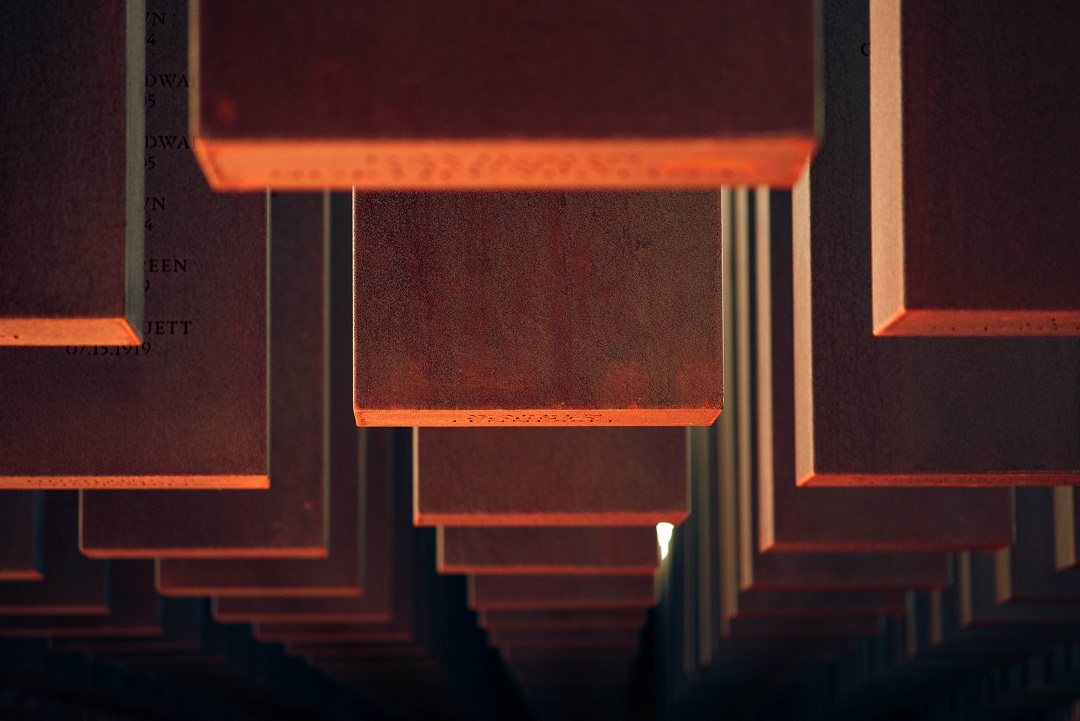 I was looking up at a copper edifice used to memorialize the life of someone I have never met. The structure that captured so much of my attention was not alone.  This structure was meticulously suspended at least 15 feet above my head along with several hundred more some adorned by a single name, but many had multiple names. I was standing in the middle of the National Memorial for Peace and Justice in Montgomery, Alabama—a memorial to commemorate the victims of lynching in the United States. (Yay!! PRA book club partners—I made it there!) Each pillar included the names of over 4, 000 African American men, women and children that were lynched. No one was convicted of any crime and faced no punishment for the lives represented at the memorial.  There was no federal protection preventing lynching in the United States up until the mid-1960s.

I had just spent hours of reading and interactively learning at the neighboring Legacy Museum and excited about the information I looked forward to learning more, and internally high-fiving myself about the information that I was proud to have already known because I learned it without the help of any school system. I knew about the economic angle of the wealthy that fueled superiority and promoted racism. I knew about chattel slavery and the horror of that experience. I knew that freedom was not free, but just an introduction to a new caste system—Jim Crow. Thanks to my father, I knew that ole Jim had decedents named “the Shuns” that “took their positions seriously and strictly as they shunned and restricted  African Americans from the resources and opportunities offered only to whites” through segregation, forced sterilizations, housing restrictions, inferior educations, employment restrictions, voting restrictions, mass incarceration, gentrification—you get the picture. I was aware that this history is intertwined in every fabric of the American Dream that produced a nightmare for many people of color. Even with this knowledge, I left the museum celebrating the resilience of my family and very proud of the person I am becoming. Then, not more than 30 minutes later, I felt overwhelmingly stuck.

Literally. I stood in the same spot of the memorial for what felt like 10 hours. I stepped away and came back to the same post at least three times—pretty convinced that this is not the reaction that people of European descent experience during visits to Ellis Island!

I stood at the foot of a structure of a man who had been lynched for attempting to vote. His name was Robert Lee Chambers. He was from the same North Carolina county that my Mom is from. In my thoughts, I could hear the racial slurs they shouted and the look in the eyes of the murderous team as they allowed hate (and fear) to contort their faces. I imagined the crowd that gathered—was it 5 or 5, 000? Did it happen in the still of the night behind burlap-made masks, or was it a public affair adorned by families and children present? Did they have picnic lunches? Did they sell postcards or pieces of his clothing? Did anyone look up and witness the fear in Robert’s eyes or was his face covered? Was he burned? Castrated? Tarred or feathered? Was he afraid, or was he willing to proudly lose his life for what he knew was his inalienable right? Where was his family?  Did he have children? Did he encourage his kids to be kind? If he didn’t have children already, what would his decedents have been if he were not murdered—could they have been lawyers, doctors, maybe even the president? Besides his presence, what resources did his family unwillingly relinquish by his absence? Could he have found a cure for cancer? Could he have been great at finance or science? Could he have been a great author or artist? Was he a great Dad who hugged his children and taught them how to forgive those that despise them? How many generations have been impacted by his absence? Are his relatives ok? There were a million scenarios and questions that flooded me unexpectedly, slowly, intensely, subtly, and all at once. Two haunting questions had me submerged. 1) What would have happened if generational wealth, health, and happiness had been available to him and from the start? 2) Am I a relative of Robert Lee Chambers? I think about him often—especially when I am writing a check to pay for the education I earned from a university that was built with free brown-bodied labor…that’s another story though.

As I stood there being stuck, I thought about the work that is being done to address trauma in service delivery, but the irony in it all is that we still find it difficult to discuss race and the historical trauma of African Americans at work. The discomfort of some of my colleagues always surprises me. (Am I the only one who notices that I am the only person of color in this Albany restaurant, but that’s ok because there were two people of color on the flight to Albany–right? Or what about that time I got a warning in the mail from the Minnesota chapter of the Southern Christian Leadership Conference about my intended work travel to Minnesota advising caution to me “as women and a person of color”…No discomfort for me in 8 years–right?) Consider that when we think about historical trauma experienced by African Americans, it is crucial to recognize that the “history” is current, relevant, and uncomfortable to many people. The “history” becomes more recent each time a person of color hears a “pull yourself up by the bootstraps” comment dismissing their experience. The “history” becomes current with every action, reaction, insensitive statement, policy, or procedure that systematically negates the depth and the longevity of a traumatic experience that is isolated only to people of color. The “history” is now with every incident of injustice spewed across the news, every shooting that goes unpunished and every chant that “All Lives Matter” as the phrase implicitly states “but not yours.” Trauma is in the DNA of all Americans, privileged and oppressed. However, for the disadvantaged, it’s just harder to heal from the past when you are still under assault.

Without a doubt, discussions about race—especially in the workplace—are uncomfortable, to say the least. I have watched my colleagues share with excitement as we talk about trauma-informed care, the ACEs study and the psychological impact of trauma, but yield to discomfort in conversations about race when all of what we research and study includes evidence of the disparity among races. When we limit candid discussion, we contribute to the perpetual marginalization of the experience of many of the people who are impacted by the criminal justice system, homelessness, and serious mental illness—the very areas that we seek to “create positive social change” for. Ultimately, through our discussions, we can create a healing-centered atmosphere to address the issues that created the trauma in the first place and highlight the strength of resilience in us all.

So here I am…with all my thoughts and still a little “stuck” at times. Don’t judge me (or pity—that’s the worst!) for being a little stuck. Wouldn’t you be stuck too (or at least uncomfortable) if you had tons of questions that could have been avoided if people would have just stopped to recognize that there would be consequences to choices made not so long ago…or maybe you’d be a little stuck if your Mom’s maiden name is Chambers and that she is from that small county in North Carolina? And her Dad (your grandfather) was named J. Robert Chambers. Wouldn’t you be just a little stuck?

What I know with certainty is that as long as my feet are planted firmly on humble ground, my humility grows my humanity. My humanity fuels my spirit and my quest for truth—making MY move forward, inevitable. My move might be slower than some because I carry the weight of humanity lost long ago, with me—every day. I have no right to be tired from the weight (or the wait) because my feet are on the ground.