Thanksgiving weekend also marked a third annual family reunion…for my dog. I recognize that we’re entering into strange animal-lover territory, but for the last 3 years we have reunited with Penny’s siblings and their equally loved families. This may be slightly less weird when you consider that we were somewhat bonded together from the start–our puppies were part of a litter of six that came from South Carolina through a local New York rescue. The dogs contracted Parvovirus on their trip, which is a highly contagious viral illness that is often fatal in young animals. At first the puppies seemed healthy, but they quickly developed virus symptoms over their first few days in New York. Some families, like us, had already taken the puppies home, and watched them get emaciated and weak, despite extensive work with vets and emergency clinics. Two of the six dogs weren’t strong enough to recover, but the other four got lucky.

Penny, Lola, Roxie, and Jack survived Parvo and our families kept in touch through email and social media. We traded similar stories and decided to meet in person for the first time in Albany in September 2013. One couple (with a new baby!) drove up from Pennsylvania and one came from Massachusetts, meeting the two families local to Albany. Reunion Year 1 was a mess of dogs, kids, and leashes. One of the siblings even chewed through her sister’s leash to help her escape. 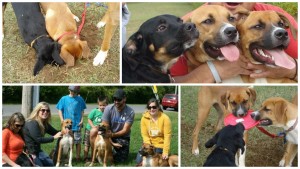 The reunion was such a success that we decided to make it an annual event, if possible. We stayed in touch with each other’s lives and met again in June 2014 in Pennsylvania. Three of the original four families were able to make the trip. The event that year was centered around a pool, which the dogs LOVED.

This year, we traveled to Roxie’s family in Massachusetts and once again had a chaotic great time full of paws and fur. People often ask if the dogs remember each other, and while I’m not sure that I’d romanticize the idea to that point, they are definitely happy to see each other and could play for days (and occasionally fight–further evidence of their genetic bond).

A repeated conversation at each reunion has been comparing the dogs’ behaviors, mannerisms, and quirks. Other than in coloring (Roxie is lovingly referred to as the black sheep of the family), the dogs are remarkably similar, especially considering the little time they have spent together. The human families share a lot of similarities as well. After each reunion, Dan and I have remarked how strange it is that everyone “clicks” so well, and that we likely would have bonded with the group even without the shared history and attachment to our dogs.

We’ve had other pets come in and out of our lives through fostering and other adoptions, and have pet sat for each other while on vacation. We’ve hosted the families in each other’s homes and have also been able to watch Lucie, the infant at the first meeting, grow from a surprisingly peaceful baby to a charming 2-year-old (who is incredibly resilient to being repeatedly knocked over by running dogs!). We may have become crazy dog people, but this Thanksgiving I was particularly grateful for our resilient little group.