Lesbians, Gay Men, and Bisexuals in U.S. Jails and Prisons 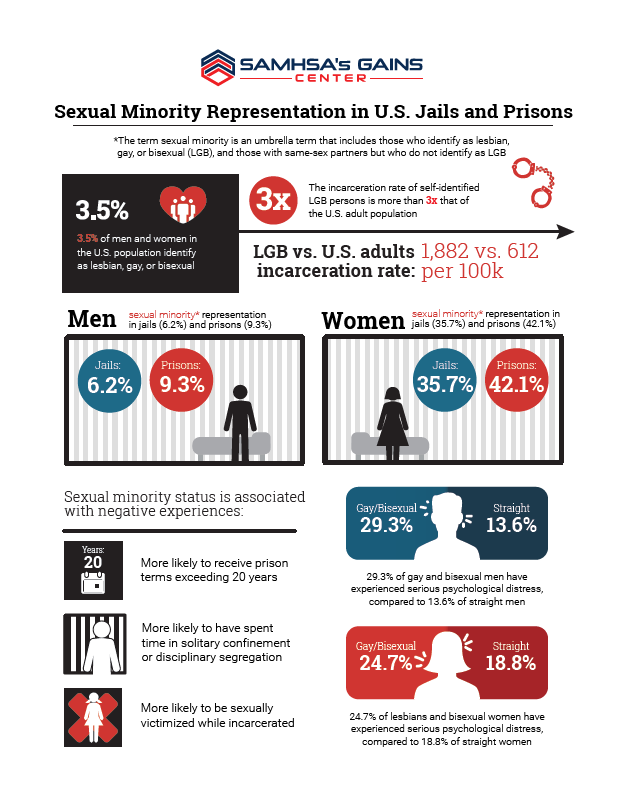 This analysis cannot explain why sexual minorities are incarcerated at higher rates than the general U.S. population or why they have different experiences once incarcerated. However, based on the data, criminal justice professionals and behavioral health providers should consider sexual minority status as one indicator of potential risk for negative incarceration outcomes, sexual assault, and poor mental health. Further studies ought to assess how pathways to incarceration differ between sexual minorities and heterosexuals, including how societal prejudice and stigma may affect disparities in arrest, sentencing, and incarceration experiences.

Click here for a text alternative to the graphic that accompanies this story.

[i] We use the term sexual minorities to include LGB people and people who have had same-sex partners prior to incarceration but do not identify as LGB.

[iii] Gates, G. J. (2011). How many people are lesbian, gay, bisexual, and transgender? Retrieved from the Williams Institute at UCLA School of Law website: https://williamsinstitute.law.ucla.edu/wp-content/uploads/Gates-How-Many-People-LGBT-Apr-2011.pdf