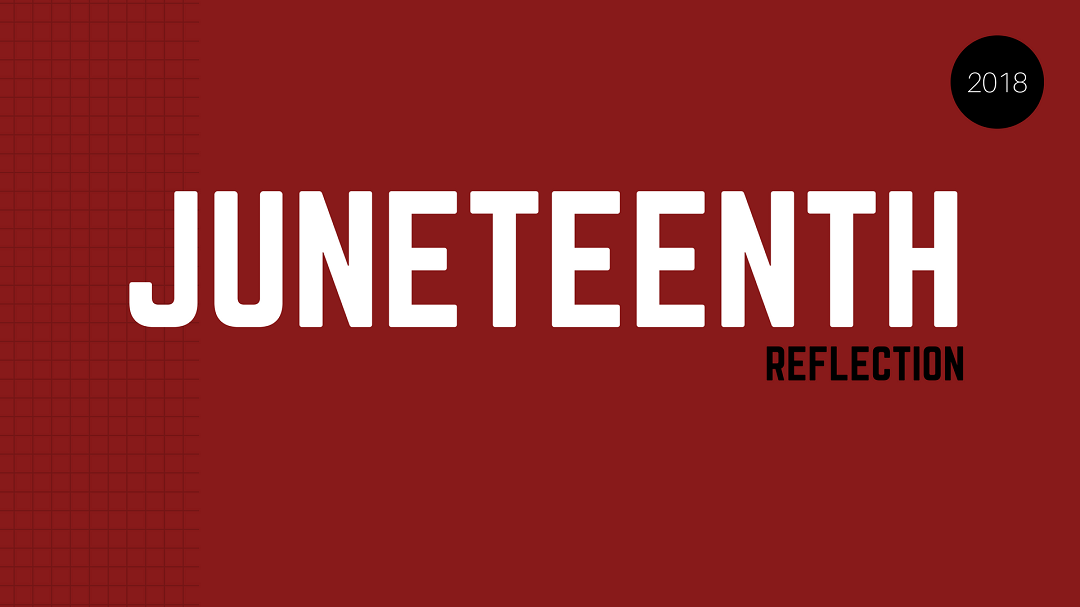 On June 19, 2018, I sat with my family—my son, his wife, her parents and my parents—and had a great dinner filled with old stories and laughter. Red, white, and blue streamers, table mats, and centerpieces infused with American flags made way for a fashionably patriotic ambiance. Comfort adorned the table with barbeque, watermelon, and red velvet cake (all crimson symbols of the bloodshed in free labor for this country) and collard greens (to signify the ingenuity and resilience to survive bondage.) Three generations, including three Veterans, shared a meal in celebration of the actualization of the end of the federal support of slavery in the United States.

During dinner, I got a call from a friend and I told her that I would call her back because I was celebrating Juneteenth with my family. Her response, “What’s that?” I was not offended by her question but I became keenly aware of the fact that I no longer wanted to explain. After all, she was at the forefront of discussions that supported that Columbus Day be changed to Indigenous People’s Day and she is the same partner that spoke so passionately about the rights of women and expressed her strong support of the #MeToo movement.  My friend—the committed animal lover, the environmentally conscious soul who is clearly aware of the importance of equity, equality, and justice for all…right?

I didn’t feel the need to explain that, we were young adults when in 1997 Congress issued a joint resolution commemorating June 19, 1865 as the day on which slavery finally came to an end in the United States. I didn’t feel energized to educate a person so conscious of many other societal wrongs, that the word of slavery’s end traveled slowly—especially for those who lived isolated and away from the triumphs of the Union Armies, where many people were still enslaved after the Emancipation Proclamation of 1863. I felt no eagerness to drum up a conversation about the thousands of slaves in Texas that were not made aware of freedom until June 19, 1865 (2 years later), when Union General Gordon Granger arrived in Galveston and issued an order officially “freeing” them. I lacked the patience to revisit the 2009 disclaimer-cloaked apology that states “Nothing in this resolution—(A) authorizes or supports any claim against the United States; or (B) serves as a settlement of any claim against the United States.” At that moment, I did not possess the capacity to lend an ear to alleviate her of her own discomfort because she “just didn’t know.” I simply wanted to share my time with my family and celebrate the significance of the one day in American History that in the minds of those last few thousand people whose souls are reflected in the eyes of my dinner guests, that everyone was free.

On June 19, 2018, I opted to practice the social dimension of wellness to deepen my sense of connection and belonging in the presence of a well-developed support system and relax in the comfort of knowing that the significance of shared experiences do not have to be explained. I smiled on the inside and enjoyed the warmth of my hibiscus tea.