In mid-September, I went to the induction ceremony at the National Women’s Hall of Fame. The Hall is close by in Seneca Falls, NY, and if you haven’t gotten a chance to go, I would recommend it. I had been to the museum before (it’s part of the National Park Service), and I chose to go to the Seneca Falls site to walk in the Women’s March 2 years ago, but this was my third trip to the induction ceremony, which takes place every 2 years.

The women being inducted were inspiring. Getting to meet Supreme Court Justice Sonia Sotomayor—and say thank you—and talking with women’s rights attorney Gloria Allred—who actually wanted to know my name—were highlights. Talking with Gloria Steinem, who has done so much for the women’s movement over so many years, was amazing. They were all amazing. The Women’s Hall of Fame chose a class of 11 this year that included Sotomayor and Allred (Steinem was already in) along with Jane Fonda (who had protesters calling her out for her long-ago war activities), activist Angela Davis, designer Diane von Furstenberg, and lesser-known but accomplished Sarah Deer (Native American lawyer), Nicole Malachowski (USAF, Retired), Laurie Spiegel (composer), Flossie Wong-Staal (biologist), and posthumously Louise Slaughter (congresswoman) and Rose O’Neill (artist). I suppose the word advocate or activist could be included in just about everyone’s description. They were all extraordinary, and many continue their work into the later years of life.

Yes, it was inspiring. Inspiring to think about all these women had accomplished and contributed to our society from a range of perspectives. But it was also thought-provoking in another sense. I found myself thinking about why we honor these women. I found myself thinking about why we need a Women’s Hall of Fame and why we need to have a reminder of their accomplishments and their influence on other women and the country. There is no men’s Hall of Fame. Men’s achievements and recognition abound, but often women, and people of color, to be sure, have their contributions overlooked. They don’t get the same opportunities. And my mind wanders.

Why can’t we pass the Equal Rights Amendment? It was first introduced in 1923 and almost ratified in 1979. Even women were split on the issue, so it sits dead in the water. Why don’t women get equal pay (women make 81.6 percent of what their male counterparts earn[i], really?)? Why are only 36 percent of businesses women-owned and why are 99.9% of women-owned businesses small businesses?[ii] Why do women make up only 6.6 percent of CEOs in S&P 500 companies?[iii] Why was there only one woman on last week’s Forbes list of top 100 innovative leaders, and why was she at number 75?[iv] Why are we underrepresented in elective office (less than 1 in 5 in Congress[v])—and never a woman President (in the United States)? On top of that, we’re more likely to live in poverty[vi] and more likely to die of a heart attack.[vii] I think my blood pressure is going up just writing this. 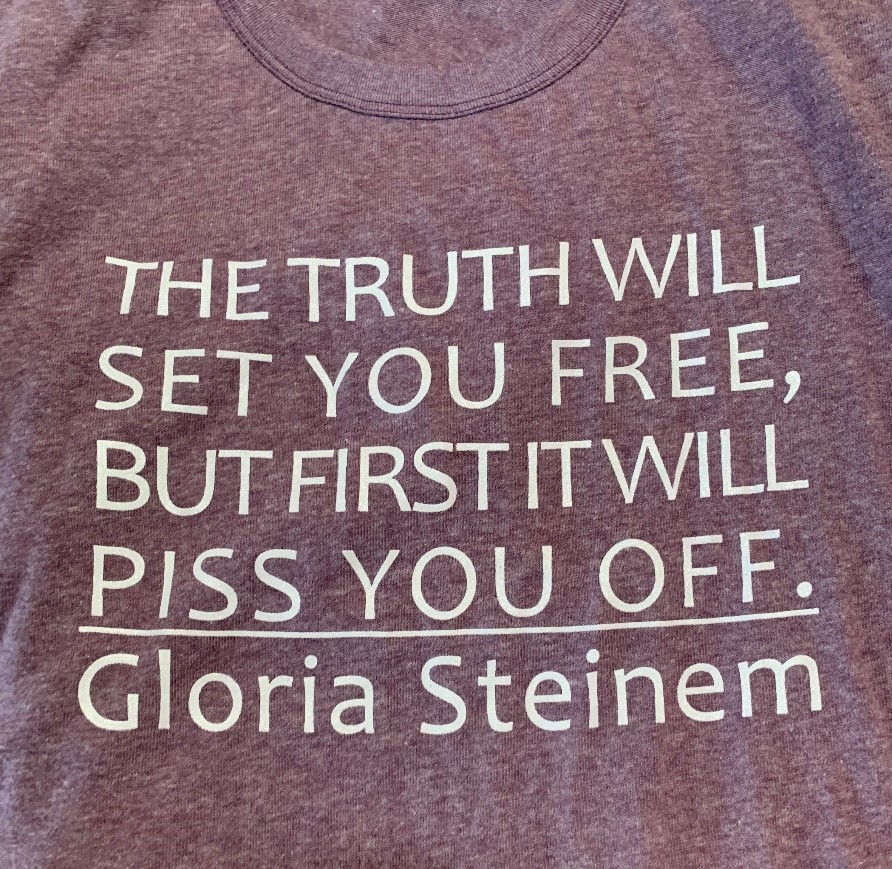 What happens next is that thoughts turn pretty quickly to self-reflection. Am I doing enough? These women I met have made real impacts. Have I? I feel like I’ve accomplished some—I have a wonderful family, great kids, and grandkids, and rock-star friends; own a business that does highly impactful work; volunteer a ton; am active politically…but is it enough?  Do I lift my sisters in all possible ways? And what could I do to make a more significant impact? It’s inspiring, but it’s also enraging and frustrating. Probably best captured by my souvenir tee from the weekend: the truth will set you free, but first, it will piss you off (Steinem).

[ii] McManus, M. (2017). Get the Facts on Women Business Owners. Retrieved from the U.S. Department of Labor Blog