The date was July 4th, 2005. I was floating in an undisclosed location off the coast of Iraq somewhere in the Persian Gulf aboard the USS Kearsarge. The 26th Marine Expeditionary Unit had been deployed for about four months at this time and we were getting to the point where we knew we were roughly half way through our tour. In an attempt to maintain your sanity throughout deployment, you make a point not to look at calendars. You always have a rough idea of when it is based on how many haircuts you have had or what kind of food they are serving in the mess halls. However, you really never have an idea of the actual date. Another reason why it remains difficult at times to keep track of the date is because many times when written out, Marine Corps Aviation Units use what it is called Julian dates. Julian dates are only good every ten years, where the first digit is the last digit of the year and the last three digits make up the number of days passed in that year. So January 1st, 2013 would be written out as 3001 and July 4th, 2013 would be written out as 3185 and so on.

But on this day, that morning, I took my usual stroll down to “Flight E” or “Flight Equipment” to get an idea of what the flight schedule looked like for the day. Much to my surprise there were no sorties scheduled for any aircraft. Sorties, in military aviation terms, are combat or reconnaissance missions. This was unusual, especially during what the Taliban declared their annual spring offensive which is an increased period of violence coinciding with the break from harsh winter weather beginning around the end of April. In a typical day, dozens of sorties would be flown and I may be involved in two or three. It was essentially a day off!

The scuttlebutt around the ship was that something special was planned. Throughout the day, patriotic decorations were put up in common areas and one could quickly come to the conclusion we were preparing to celebrate Independence Day. That afternoon we were told to change into our PT gear (which was Marine issued green t-shirts and Marine issued green shorts, neither of which would you see walking down a fashion runway) and report above to the flight deck. We were greeted to what I now know as a 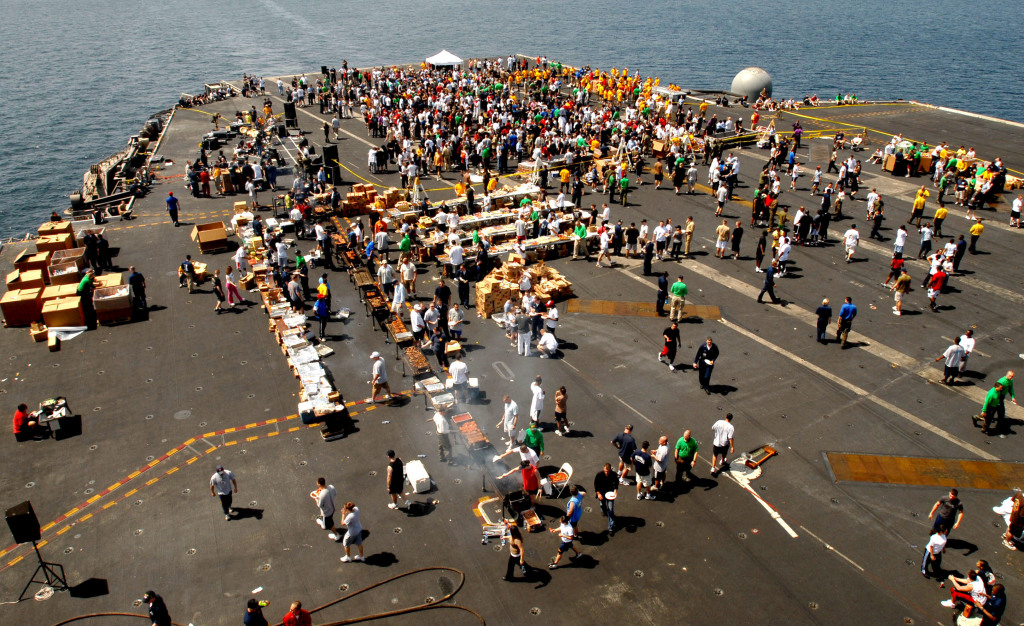 “Steel Beach Picnic”. The flight deck was removed of most aircraft and replaced with barbecues, picnic tables, and music. The “cherry on top” ended up being when a CH-53 Sea Stallion landed on one end of flight deck and as the back hatch dropped, the New England Patriots Cheerleaders disembarked only to be followed by one Chuck Norris. You want to talk about 2,200 ecstatic Marines! Our guests for the day made their rounds and we got to speak with them briefly and take pictures. Patriotic songs played loudly and we got to pretend at least for a little while that we were home in someone’s back yard. It was a great day.

Now this may have been only for a few hours one summer afternoon, thousands of miles from friends and family. But it felt normal and was a taste of home.

In the years before and after 2005, I would spend other holidays deployed which were not as festive. But July 4th, 2005 is one that I will never forget for many reasons. As you celebrate our country’s independence this year, please do not forget what America’s birthday truly means and more importantly those that fight holiday after holiday for our freedoms. Semper Fidelis!