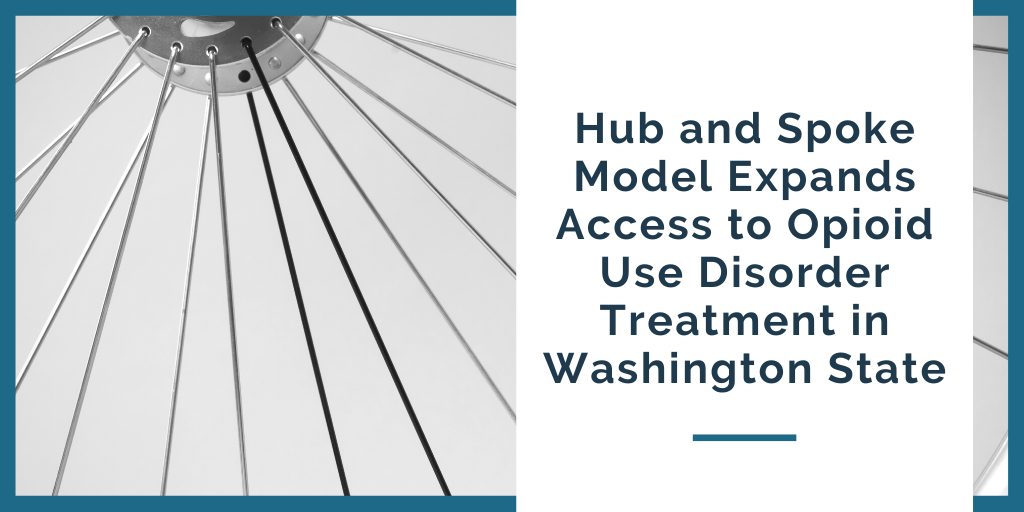 Combining proven approaches with local flexibility, Washington State built a “no wrong door” approach to treating opioid use disorders (OUD) that reached nearly 5,000 people in 18 months. That was the conclusion of initial research into the state’s Hub and Spoke model of OUD treatment led by Principal Investigator Sharon Reif, Ph.D., senior scientist and deputy director of the Institute for Behavioral Health at Brandeis University’s Heller School for Social Policy and Management. The research is funded by the National Institute on Drug Abuse (NIDA) and is being conducted in collaboration with the Washington State Division of Behavioral Health and Recovery.

“The idea behind the Hub and Spoke model is that it essentially extends your base of knowledge, and that increases access to skilled providers,” says Reif. “A hub is someplace where you have detailed expertise about a topic and a champion who is leading the charge. Spokes connect with the hub to expand their knowledge and services to meet patients where they are and engage them in needed services.”

Vermont created a Hub and Spoke model where the hub is an opioid treatment provider that can initiate medication for a person with an OUD, and the spokes are primary care providers who can continue the person’s treatment when they are stabilized. In Washington State, a hub is “a program with the knowledge, expertise, willingness, and capacity to both prescribe and extend the prescribing of all three medications for opioid addiction treatment, but can also act as a champion and an expert the spokes can rely on,” Reif explains. Of the first six Hub and Spoke networks the state funded, through the SAMHSA Opioid State Targeted Response grants, three hubs were primary care providers with integrated behavioral health treatment, two were behavioral health organizations, and one was an opioid treatment program. The state has since funded and implemented five additional Hub and Spoke networks to cover more rural areas of the state.

In addition to adapting the Vermont Hub and Spoke model, Washington borrowed from the “Massachusetts model” the concept of having nurse care managers as physician extenders at each hub and included care navigators to help engage individuals at the spokes. The care navigators, who may be community health workers, may need both education about medication treatment and also formal approvals to work in special settings such as the emergency department or criminal justice programs, investigators learned.

The goal, Reif notes, is to create an integrated system of treatment that allows individuals to access treatment for an OUD from a trusted provider, wherever they enter the system. Networks in the Washington Hub and Spoke model must include as spokes at least two providers with substance use expertise, one with mental health expertise, and one with primary care expertise. They can also include referral and social service agencies. The first 6 original Hub and Spoke networks included 8 to 21 participating organizations each, with a total of 150 prescribers.

In four of the six original networks, criminal justice agencies are serving as spokes, says Mary Brolin, Ph.D., scientist at the Institute for Behavioral Health. They include prisons, jails, jail release programs, drug courts, probation, and police and fire departments. Some of these are just referral agencies, but in a few of the jails, and in the drug court, a nurse care manager prescribes OUD medication, Brolin points out.

There are several advantages to the way Washington State has conceptualized its Hub and Spoke system, according to researchers. Brolin notes that before the development of these treatment networks, many of the agencies serving as spokes did not prescribe any OUD medication. “Even if some of them were waivered to do so, they were not choosing to take on these clients because they were nervous about serving them,” Brolin says. “Now, with support from the hub, it lets them take on that role.” This expands the number and type of agencies that can prescribe medication for OUDs and also helps ensure that individuals don’t have to move between and among agencies as their needs change, Reif remarks.

In addition, this model lends itself to sustainability. “Often, with grant-funded projects, the worry is you fund an intervention and then it disappears,” remarks Reif. But the Hub and Spoke model in Washington State is creating networks of community agencies that are building strong relationships and can call on one another for their particular expertise. These relationships should outlast the grant funds, Reif believes.

Washington State recently funded a second generation of its Hub and Spoke model. With federal State Opioid Response funding, Washington is developing smaller, low-barrier dyads, called Opioid Treatment Networks, which expands treatment sites to 17 nontraditional settings, including jails, emergency departments, syringe exchange programs, homelessness shelters, and fire departments. These sites will serve as hubs, and each will have at least one local OUD medication provider as a spoke. This will extend treatment to underserved areas and groups, Reif points out.

The initial NIDA-funded research into the Washington State Hub and Spoke model found that the state was able to far surpass its original goal of serving 2,400 individuals. They did so by increasing integration of care, offering a “no wrong door” approach to treatment, engaging with community agencies, and supporting providers who offer OUD medication. Because each network in the state is unique in its composition, they can be difficult to replicate, researchers learned.

Recently, the Institute for Behavioral Health at Brandeis University received another NIDA grant that will allow them to continue their research into Washington State’s initial Hub and Spoke model and the newer low-barrier dyads. “I think the low-barrier sites are interesting in terms of smoothing the way to helping somebody, as well as empowering agencies that aren’t traditionally in the business of treatment but are on the front lines of dealing with people who have opioid use disorders,” Reif says. She believes that in the face of the ongoing opioid crisis, it’s imperative to develop, implement, and evaluate novel models to improve OUD treatment access and increase a community’s capacity to respond.