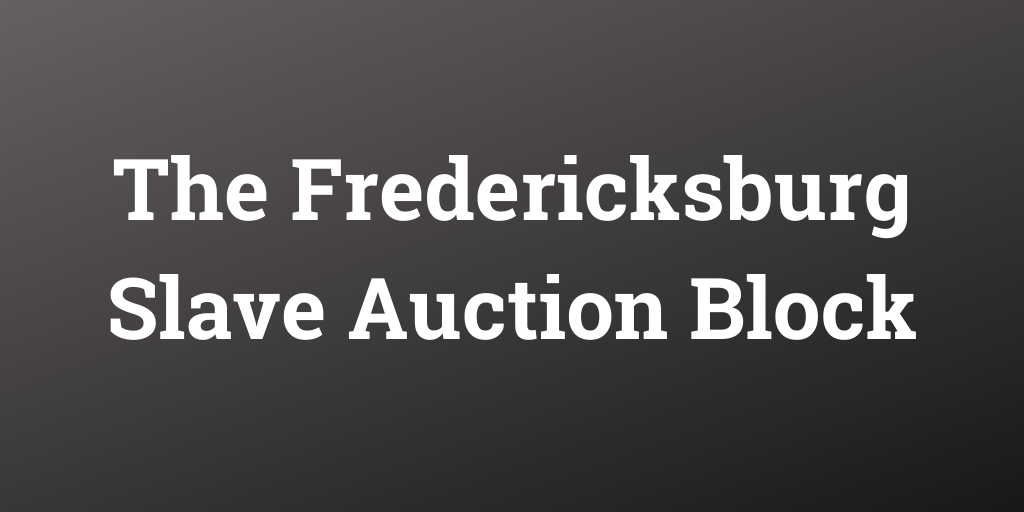 I am embarrassed to admit my ignorance about the ubiquity of demeaning artifacts that still exist across the country, as they pertain to Black people.

A few weeks ago, during a conversation with a point-of-contact in Virginia about an upcoming site visit, I learned that their briefing with the Fredericksburg Mayor had to be delayed due to an elevation in demand for the removal of the slave auction block that has existed in the city for 176 years. Fredericksburg’s population of 30,000 residents is about 25 percent Black. I’ve been wondering how the thousands of Black parents living across Fredericksburg might address questions from their children about what the monument is, and why it is so important that it has been memorialized in one of the most highly trafficked areas of the city.

Recently, prominent leaders from across the country have expressed their perspectives on the importance of monuments that romanticize heroes of the Confederacy, and they have also expressed their condemnation of the individuals that deface and remove them. With an impending Executive Order intended to inflict harsher punishment on people who oppose the existence of the slavery-supporting monuments, the policy would serve to strengthen a systemic approach to racism. The systemic nature of this policy and others like this affords discriminatory actions from individual law enforcement officers, who may not be racist themselves, but are compelled to enforce laws that will disproportionately affect Black people and people of color.

Countless people across the country struggle with the “historical artifact vs. monument to bigotry” argument as it pertains to slave auction blocks, statues of Confederate leaders, Confederate flags, etc. Both sides claim to have evidence on their respective sides, yet the best source for the meaning of the roots of the Confederacy along with every branch and leaf that springs from it should come from the “horse’s mouth.”

The Cornerstone of the Confederacy

Several key phrases from Stephens’s speech stand out as particularly salient, providing great lucidity to the Confederate stance on slavery and Black people. About midway through his speech, Stephens addresses what he perceives as the immediate cause in the need for revolution:

“The new constitution has put at rest, forever, all the agitating questions relating to our peculiar institution African slavery as it exists amongst us the proper status of the negro in our form of civilization. This was the immediate cause of the late rupture and present revolution.”

“Our new government is founded upon exactly the opposite idea [that all races are equal]; its foundations are laid, its corner-stone rests, upon the great truth that the negro is not equal to the white man; that slavery subordination to the superior race is his natural and normal condition.”

Stephens seeks to reassure his constituents and soldiers that economic class would have no bearing on equality in the eyes of the law, but race would:

“Many governments have been founded upon the principle of the subordination and serfdom of certain classes of the same race; such were and are in violation of the laws of nature. Our system commits no such violation of nature’s laws. With us, all of the white race, however high or low, rich or poor, are equal in the eye of the law. Not so with the negro. Subordination is his place.”

To ensure that there is no doubt or confusion on this matter, Stephens reiterates the theme that slavery and racial subordination is the chief cornerstone of the Confederate ideology:

“This stone which was rejected by the first builders [the Union] ‘is become the chief of the corner’ the real ‘corner-stone’ in our new edifice.”

History cannot be changed, nor should it be forgotten; however, there are portions of our history that we should recognize as being undue of the lionizing that they receive. Many of the Confederate statues and monuments were erected across the country as a response to the civil rights movements for equality during the 20th century, and they are understandably interpreted as an exhibition of defiance to the ideas of racial equality. Flags are simply cuts of cloth with colors and shapes on them, and statues are just hunks of shaped stone and metal, yet they are built and flown in public to communicate information to others. The continued fight for the display of Confederate flags and statues communicates an affinity for Confederate values and efforts, the same values explicated by Alexander Stephens and other high-ranking Confederates. When I see Confederate imagery mounted on the back of a truck, on a belt buckle, at a government building, or posted on private property, I must assume that the people or government officials are communicating the ideas of Alexander Stephens in as concise a symbol as they can. A red hourglass shape on the back of a spider provides a ton of information to those that recognize it, so do flags and statues. Ideologies are very stubborn. If there is to be any real impact on the Confederate ideas that persist across the country, then we have a ton of work ahead of us.