A wise person once told me, take advantage of professional development opportunities, no matter how large or small. All you need is one good take away message, tool, skill…one golden nugget…to make it all worthwhile.

As part of my professional development for this year, I attended the National Wellness Institute’s (NWI) 2019 National Wellness Conference in Orlando, Florida in early October. Although I’ve been aware of this organization for several years, this was the first opportunity I had to attend the annual conference. Primarily, I was attending because a colleague and I were invited to present on our forthcoming curriculum Creating Mentally Healthy Workplaces, but I was also very interested in exploring what NWI was all about and tapping into the knowledge and expertise being offered through plenary sessions, workshops, book signings, etc.

I thoroughly enjoyed my first full day at the conference. I was able to participate in a plenary session focused on the science of kindness, several workshops, including well-being-focused leadership and multi-cultural wellness programming, and was winding up my day with a session on mindfulness in the workplace. During this last session, we had just completed a short meditation exercise when I received a text message alert, and I think my heart stopped: 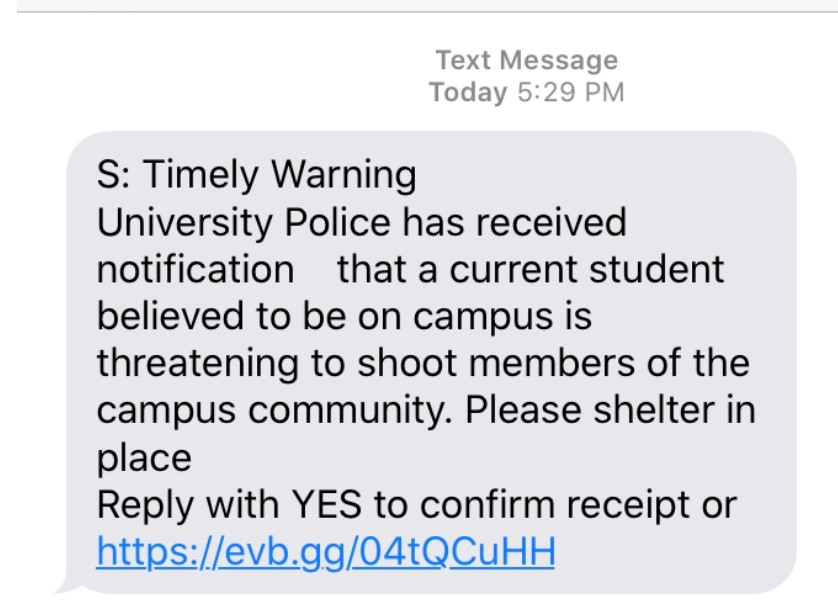 The message was from my daughter’s SUNY campus. The next text I received was from my daughter saying, “Oh God. I’m scared”. Fight or flight response kicked in immediately, and I quietly, but very quickly, exited the conference room and called my daughter. I listened to her initially sobbing and then pulling herself together to let me know that she and her roommates were safe, they had heard no shots fired, other campus friends had been in touch and were also safe; no additional information had been provided other than what was in the initial text that we both received. Feeling fractionally better having heard each other’s voices, we hung up waiting for further information or instruction. For an excruciatingly LONG hour, that seemed like a week, we texted back and forth. My heart was breaking with each text, “I always felt so safe here,” “this kind of thing wasn’t supposed to happen here,” “we’re all just huddled in the common room crying,” and then the video clip of 8-10 officers, several with weapons drawn, entering the campus library right across the street from her dorm…what was I supposed to do? I was 1,000 miles away. Luckily, before I booked a flight home, the lockdown was lifted, and my daughter called to say that there was no one on the campus with a gun. A student’s phone was hacked, and the threatening messages were being sent from somewhere else, not from anyone on campus. A female student, we assume the one whose phone was hacked, was led out of the library and taken to the station for questioning. What a relief!! But, the damage had been done. I talked to my daughter two more times that night, trying to re-assure her that she was, in fact, safe.

The next morning, I was up bright and early, packed, and ready to head home. I called my daughter, who said she had had a rough night’s sleep, but thought that she felt a little better than yesterday. I was so distracted by the events of the previous day that I considered blowing off the morning plenary, but when I looked at the program, I changed my mind. The morning panel discussion was “Thriving in Today’s Environment.” I thought this sounds like something I might need to hear. As I settled into my seat with 300-400 other eager conference-goers, a text from my daughter pings, “I think I’m too scared to leave the building and walk to class.” As I’m about to walk out to call her, she texts saying that class is actually canceled, so she’s going back to bed. Feeling very defeated and helpless, I listen intently to the morning’s panelists as they discuss multi-dimensional approaches to wellness for individuals, communities, and businesses. But I’m eager to hear something, anything, that will help turn this crisis around and move me, my daughter, all those affected forward. I’m on the edge of my seat, ready to shoot my arm up to ask for someone’s expert guidance…but there will be no Q&A; I’m deflated, and they’re wrapping up with final thought from each panelist…and finally, I’m given my gold nugget!!

The final panelist states that he would like to paraphrase the Holocaust survivor and writer, Victor Frankl. I’ll never remember his exact words; I quickly typed notes into my phone. It was exactly what I needed to hear, something that I could offer to my daughter to help her move forward in a mindful way. Here is my text to her:

“OK, so the presenter paraphrased holocaust survivor Victor Frankl. Frankl’s actual quote was: ‘Between stimulus and response there is a space. In that space is our power to choose our response. In our response lies our growth and our freedom.’

The way he paraphrased it basically stated that any adversity, challenge, threat to our person, family, environment is the stimulus, and our response or reaction to it is determined by how we use that free space. Our power is the power to decide what to do, how to respond…not necessarily the visceral response but the eventual response…what are you going to do now?”

And then I added, “This is your chance to be creative and use what you have at your disposal to affect change…personally, locally, globally…the freedom to choose and act is yours…use your freedom wisely, be creative, don’t live in fear.”

My daughter read this, called me, and said that she had shared it with her roommates, and something clicked. They immediately started discussing ways to get more involved on campus, through promoting active shooter trainings (which hadn’t previously happened), voter registration, etc., to prevent or at least be more prepared if something like this happens again. A gloriously happy mom moment!

In closing, I have to say that this golden nugget was a serendipitous gift and a reminder to me to never turn down an opportunity to learn and to continually seek those opportunities.