America; I Too: a Movement and an Education 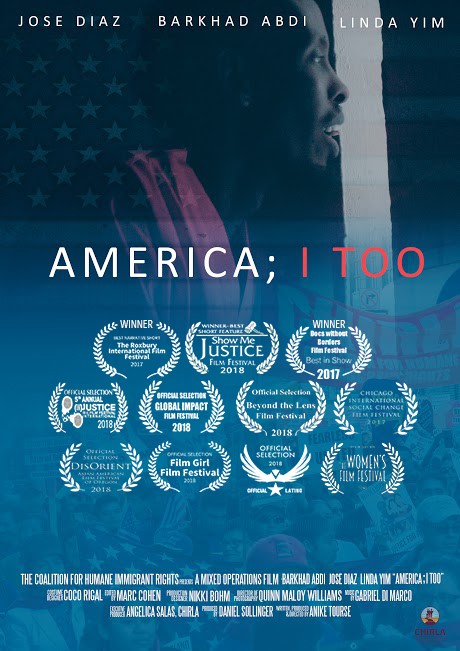 I attended the 2019 Annual Conference for the Society for the Study of Social Problems (SSSP) in New York, New York and had the honor of watching this 20-minute film. America; I Too follows the story of three immigrants who have been arrested by Immigration and Customs Enforcement (ICE). The short film introduces you to our main characters and quickly delves into how each one of them is arrested. Based on real accounts of people arrested by ICE, we see the characters experiences with ICE, how they navigate the court system to avoid deportation and watch them find hope in what often seems like a hopeless situation. What makes this short film so worthwhile, besides award-winning performances, is the information about legal assistance for immigrants, how to help people in your community attain legal citizenship, and advocacy efforts of organizations like the Coalition for Humane Immigrant Rights of Los Angeles (CHIRLA), which provided the educational information.

The film was funded and released by New Day Films and directed by Anike Tourse, who also stars as an attorney in the film. Anike hosted the event at SSSP and held a brief discussion following the film that focused on it can be used in all educational settings. The discussion also included ways that the film could be shared at institutions that serve immigrants or families of immigrants, clinicians who treat immigrants or their families, churches, and anywhere that would like to be more accustomed to the plight of immigrants in the United States.

New Day Films aims to provide award-winning films to educators, community groups, government agencies, public libraries, and businesses since 1971. They have hundreds of films that break down common misconceptions of some of the United States’ most publicized social problems. As a democratically run company, founded by a group of feminists that couldn’t find a distributor to distribute their films in the late 1960s and early 1970s, New Day Films has won 1 Academy Award, had 9 Academy Award nominations, won 4 Emmys, and has received hundreds of awards at various prestigious film festivals.