The Experience of Veteran’s Day among Deployed Soldiers 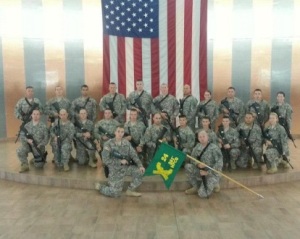 Deployed soldiers of the 361st MP Co out of Ashley, PA.

When my husband deployed in August, I quickly learned many tough lessons that military families regularly face throughout a deployment. One such lesson is that holidays will not be the same throughout the duration of a deployment as they are when your significant other is home. Veteran’s Day is no exception to this rule.

Prior to my husband’s deployment, I always had a respect for Veteran’s Day since I am a member of a military family. In addition to my husband’s service, my father is a former Marine, as are some of my adopted “uncles.” However, I have been just as guilty as many other Americans of looking forward to a day where there is no school or work or a day when there will be great sales at the mall, rather than considering the true meaning of the holiday.

It should come as no surprise that I have a new-found appreciation for the holiday now that my husband is deployed. On one hand, Veteran’s Day is like all other holidays during a deployment. It brings with it a tinge of sadness because it serves as another reminder that my husband is 7,000 miles away for the next 8 months. On the other hand, Veteran’s Day is a unique experience during a deployment because it is a day of the year that I know that others are recognizing and sympathizing with my experience, which is common among military families. I am instilled with a heightened sense of pride for my husband and the men and women of his unit, as well as all soldiers, that are apart from their families and loved ones for the benefit of our entire country. I have a refined respect for the struggles of military families everywhere.

Reflecting on my own thoughts about Veteran’s Day while going through a deployment, made me wonder how deployed soldiers reflect upon the holiday. This is what some of the soldiers from the 361st MP Co., who are currently deployed in Kuwait, had to say:

“What Veteran’s Day means to me as a deployed soldier is that it makes me think of all of those who have come before me. You don’t actually think of yourself as a veteran while you are overseas. This is my first deployment so I do not know what it will feel like once I return home, but I think that then my perceptions of myself will change when I hear someone ask what pops into your head when you hear Veteran’s Day.”  CPL Dan Chonko

“When I am over here I don’t think of it really as Veteran’s Day. It isn’t until you’re coming home, being escorted by police, fire trucks, and seeing people up and down each side of the street waving flags and cheering. That is what I remember or what comes to mind when I think of Veteran’s Day while deployed. I also think of it whenever I hear the National Anthem. It isn’t until you return home that you really consider it. That is when it truly means something; when you have the opportunity to look back and think I was a part of something more that barely anyone can relate too.” SGT Kyle Stout

“While deployed, Veteran’s Day is just another day that you have to put on your uniform, lace up your boots, and go to work.  When I’m over here, holidays are just like mile markers towards home.  With every holiday that passes I’m closer to coming home to my beautiful wife and boys.  I do always take a few minutes and think about what my grandfather had to go through when he fought in World War II.  I also say a prayer for my two buddies whose lives were cut short way to soon. RIP SGT Jan Argonish & SGT Clayton Willey.” SSG Chris Derrick

“A day to remember those who came before me and paid the sacrifice of leaving their families for long periods of time.  As a deployed soldier, it gives me great pride to be able to serve those who served before and with me.” SFC John Adams

“As a deployed soldier, Veteran’s Day is significant in that it brings to mind those who have gone before, those now, and those who inevitably will follow after to foreign shores to stand in harm’s way in the protection of our homeland and the preservation of the American way of life.  We must not forget those men and women who sacrifice their freedoms to face the dangers inherent in the service of their country.” SSG Maury Silverman

Just like in the civilian world, Veteran’s Day means different things to different soldiers. Using Veteran’s Day as an opportunity to reflect on what the holiday currently means to you and also consider how that meaning might change if you were directly affected by military service, is a great exercise to honor those who serve, have served or will serve.