“People fake a lot of human interactions, but I feel like I fake them all,
and I fake them very well. That’s my burden, I guess.”
– Dexter Morgan, Showtime’s Dexter (Manos & Cuesta, 2006)

Fall semester of 2012, I wrote a paper entitled Psychopathy: A Study on Etiology, Treatment, and Future Implications for my abnormal psychology class. Psychopathy is a disorder that has always intrigued me – it is depicted so frequently in popular culture and always draws a captivated audience, yet few people actually know what it really entails. I thoroughly enjoyed researching the topic, writing the paper, and learning more about the disorder and how it intertwines with the criminal justice system.

For example, did you know that research has shown that as many as 70-80% of criminal offenders in the United States would meet the criteria for antisocial personality disorder, and as many as 15-25% of those offenders would also meet the requirements for psychopathy as defined in the Psychopathy Checklist? Hart et al. found that offenders who scored high on the PCL-R were four times more likely to recidivate violently than offenders who did not meet the criteria for psychopathy. Steadman et al. studied risk factors in civil psychiatric settings and found that among the 134 risk factors they tested, high scores on the PCL-R were the strongest predictor of serious violence.

It is important to understand the incidence of psychopathy, how it is defined, and how to recognize it because the label “psychopath” carries considerable weight – both in the criminal justice system and in society at large. Understanding the possible etiologies of psychopathy and the efficacy of different treatment methods is essential not only to comprehending the disorder itself but to knowing how to protect people from the harmful behaviors that can be associated with it.

The director of my graduate program encouraged me to submit the paper for the Northeastern Association of Criminal Justice Studies (NEACJS) call for student papers for their 2013 conference. I did, and my paper was selected for the second place prize in the graduate students category. That meant a small monetary reward as well as the opportunity to present my paper at the 2013 conference. 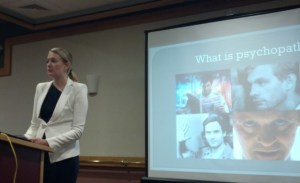 The NEACJS 2013 conference took place at the Baypointe Inn & Conference Center in Portsmouth, RI from June 5-7. I presented my paper on the morning of Friday, June 7 along with a panel of three other student presenters whose papers received prizes. It was a really neat experience to be able to share the stage at the conference with other students and learn about the exciting work they are doing. I met some fascinating people – everyone from professors to researchers to cold case evaluators – and had the opportunity to catch a couple of terrific sessions on research that’s currently taking place in the field. Presenting at the conference was a great experience, and it was very gratifying to be able to share my research and thoughts on the subject with a broader audience. Now I just need to come up with a topic to write a paper on to submit for next year’s conference!

Arin is a Project Assistant for SAMHSA’s GAINS Center for Behavioral Health and Justice Transformation.