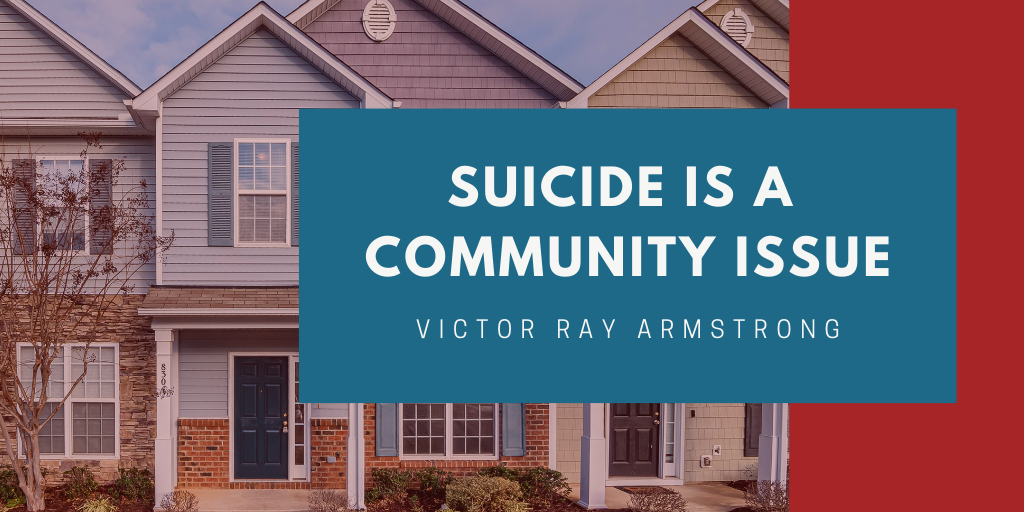 Suicide Is a Community Issue

Perhaps I am influenced by my social work teachings, but I believe the way we make sense of the world, the way we define ourselves, is a combination of our disposition and our life experience. By disposition, I am referring to the innate qualities and characteristics that influence our personalities. We’re born with it and it helps to shape how we navigate the world around us.

Community can be defined by geography or relationship. You may define your community as friends, neighbors, co-workers, or cultural and racial groups, as well as the town where you reside. How you define community may impact your perception of how you are impacted by suicide. What is your community’s narrative regarding the impact of suicide and, what if the narrative you have of how suicide impacts your community, however you define community, is wrong? Often the narrative is that suicide affects “other people.” The reality is that suicide impacts all communities.

In our first-responder community, law enforcement officers and fire fighters are more likely to die by suicide than in the line of duty.[1] In our Veteran community, the average number of Veteran suicide deaths per day has hovered around 20 since 2007.[2] In the lesbian, gay, bisexual, trans, and questioning (LGBTQ) community, 42.8% of gay, lesbian, or bisexual high school students seriously considered suicide in 2015, versus 14.8% of heterosexual students.[3] In our medical community, we lose, on average, one physician per day to suicide.[4] In our faith-based community, a study by the Clergy Health Initiative (CHI) at Durham-based Duke Divinity School found that clergy are at greater risk for depression and anxiety, mostly due to stress, than those with other occupations.[5] In my home state, North Carolina, suicide is the second leading cause of death for children between the ages of 10 and 17, and in my home county of Mecklenburg, North Carolina, 5 children and teens died by suicide in 2017.[6]

My narrative, growing up in the African American community, was that people of color don’t die by suicide; that it was not a problem for the Black community. That was a narrative, handed down to me by my family and by my community. My narrative was that in my community, “we are strong, we are resilient, and we survived slavery, therefore, we can survive anything.” I was told that we don’t need therapy, “we just need God.” I was told, “If you’re struggling, pray harder and have more faith,” but do not talk about depression or anxiety. You just need to “man up.” The reality is that from 2001 to 2017, suicide rates increased by 182% for Black girls aged 13 to 19 and by 60% for Black boys in the same age group.[7] My narrative was wrong because I was uninformed, and so was my African American community.

Suicide is a community issue, however you define community. It is not a school issue, or a law enforcement issue, or a hospital issue. Suicide isn’t limited to the young or old, gay or straight. It is not only an issue in the Black community, White community, or the Latinx community. It is an issue that impacts every community. It is a public-health issue that will require a public response, a community response. It will require a response that considers that we not only need evidence-based, and evidence-informed practices, but community-informed practices. It will require population-level interventions that focus on the root causes and contributing factors, including unresolved trauma, poverty, racism, and violence, all of which put people at higher risk of developing mental health issues. It will take all of us working together to end this robber of life.  Suicide is a community issue. It deserves a community response.