SMVF Policy Academy – This Work Will Make a Difference! 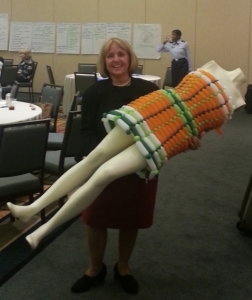 Donna’s Award for a job well done, presented by the Minnesota Team (Who also should be commended for their talent for ballon dresses!)

Last week PRA staff traveled to Alexandria, VA for the 2012 Service Members, Veterans, and their Families Policy Academy meeting.  The meeting was an impressive event especially given the small window of time that was allotted for planning and preparation. In the end, all of those involved – PRA staff, presenters, subject matter experts, and state team members – went the extra mile to make the event a successful component of the 2012 Policy Academy process.

At the beginning of the PA meeting, one participant helped frame our purpose by reminding attendees that our Service Members, Veterans and their Families (SMVF) “need someone who gets it”.  If state teams could figure out how they wrap that concept around their work at the PA meeting they would leave the PA closer to reaching their goals.

This year we added a Leadership Team that I was asked to facilitate.  It was a privilege to have the opportunity to work with the Team Leaders of established 2008, 2010 and 2011 teams who shared their lessons learned and offered guidance to the newly forming teams.  Kathryn Power, Lead of the Military Families Strategic Initiative and Regional Administrator for Region 1, joined several of the State Leadership Team’s work sessions. She expressed her thoughts on leadership and ideas for how she would like the State Leadership Team to relay the value of Policy Academies and the PA’s benefit to our Service Members, Veterans, and their Families.

For me the highlights of the PA came from our Veterans who shared their personal experiences.  Derek Blumke spoke of his sense of aloneness on a campus of 40,000 people surrounded by classmates who couldn’t understand why he chose to serve as he struggled with “going from doing the most important thing you will ever do, to the fairy tale world of college.”  PRA staff members Nick Meyer and Gregg Goodale both received standing ovations with their moving stories that gave all of us a small bit of insight into their lives as Veterans.  All of us who know Nick were glad to hear that when he needed to, he was able to turn to his dad, a fellow Veteran, for much needed peer support.  Gregg’s story about a fellow classmate helped to illustrate the difference between a civilian perspective and a military perspective as he shared his frustration with that classmate who wasn’t carrying his weight and what that kind of behavior would have meant in the Marines.   These stories are the key in allowing those of us who are committed to better serving our SMVF  get closer to becoming people “who get it”.

In the midst of all of the logistics and details, these deeply personal stories served as important reminders why everyone involved worked so hard to make the PA meeting happen and why we are committed to the work we do.  As our Leadership Team said in their report out – This work will make a difference.