Shaping Reform, One Word at a Time

As the second of three sisters, I am well accustomed to life in the middle.  It’s been a long time since I’ve lived with my sisters, but the lessons learned from being at neither extreme – oldest nor youngest – have stayed with me. I tend to look at life from both sides, rarely straying into overly thrilling or overly risky situations, actions, or opinions.

This centrist approach has served me well. In fact, a former boss and influential mentor often referred to me as the Great Mediator. But in times of self-doubt, I worry that I am too middle of the road. I wail to my family and friends, “I have no passion! I don’t want to be vanilla! Why can’t I be rum-raisin?” Helpfully, they offer, “But words are your passion….aren’t they?” In my irrationality, I dismiss this. ”No! I write because it’s easy for me. How am I really making a difference in this world?”

And to be honest, writing is something I have always taken for granted: a sure “A” in school, a way to pay bills for over 25 years.  A couple of recent incidents, however, are prompting new thoughts about my relationship with words.

This seed of insight was first planted during a conversation I had with my sister, who was describing a woman to me as, “You know, the kind who wears “***k me shoes.” Much to the surprise of both my sister and me, I exploded.  I – Ms. Nonconfrontation – objected to the crudeness of the expression, but more importantly, to the perpetuation of blaming the victim, that a woman is “asking for trouble.”

I gave this conversation very little thought until months later when I attended the American Public Health Association Annual Meeting. I was particularly interested in one of the last sessions of the conference because of its applicability to my work at PRA. The speaker presented her work on a trauma-informed model for adjudicated adolescent females. At one point in her discussion, she noted that there has been a shift in thinking from “juvenile prostitution” to “commercial exploitation.”

The urge to roll my eyes at yet another example of bureaucratic label-swapping was halted by the sudden recollection of my “shoe” rant to my sister. After some reflection, I realized that this was another example of the same argument. “Juvenile prostitution” hints at a sense of the girl’s culpability; “commercial exploitation” suggests factors that are, in fact, out of the girl’s control.

Authors of a more recent report issued by the Georgetown Center on Poverty, Inequality, and Public Policy (2012) suggest that significant rises in the number of girls in detention and placement may be the result of too few community-based alternatives to detention and residential facilities geared to young females, which again transfers the onus of responsibility from girls’ failing to society’s failings.

This shift in thinking is far more than a “name game” or a “blame game.” Research has shown that how we think is shaped by language and that “changing how people talk changes how they think” (Boroditsky, 2011). There have even been studies on how language may subliminally assign blame. So, as a shaper of words, it’s time for me to recognize that in my quiet – perhaps vanilla-like way, I can make a difference. Finding courage in the fact that subtle vanilla remains the most popular of all ice cream flavors, I can remain steadfast to my approach of balancing the world one word at a time. 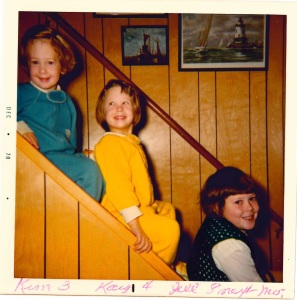 The Peavey sisters in 1970, with Kay in the middle.