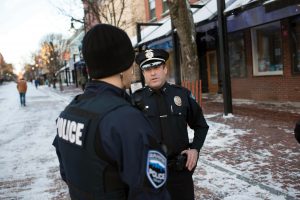 In your response to the obituary of Maddie Linsenmeir, you list 12 strategies that communities can use to lower the number of fatal overdoses and addiction-related deaths. Many of the strategies you mention relate to public health/medicine.

What do you envision as the ideal relationship between law enforcement and public health systems?

Both policing and public health seek to do two of the same things: lower a community’s morbidity and mortality. The public health perspective takes a very wide view of what morbidity means—what it takes to have a community flourish, for people to be able to pursue their life plans, to feel at home in their community, and so on.  The law enforcement perspective is a bit more literal—the number of robberies, stabbings, shootings, and so on. The definitions at face value have a similar mission, but over the decades, interventions from the two different perspectives have been implemented with a wall between them. Going forward, we need to break down that wall as much as possible.

When it comes to overdoses, the police are in direct contact with the people in distress or experiencing an overdose. In the case of opioids, the most effective measure for addressing addiction is not incarceration, it’s treatment—specifically medication-assisted treatment. Police need to be vectors that point people in the direction of the most effective treatments. Doing so will not only lower mortality but also reduce recidivism.

How can communities better support law enforcement in the role they serve as first responders?

I question the distinction between law enforcement and public health. When cops say they’re in the law enforcement business, I say “No, you’re in the policing business. Before you enforce any laws, your first responsibility is to protect and rescue people in danger and serve the community.” The best way the community can support the police is by reframing their work as alternatives to policing, and instead see the police as a complement to their work, who can refer patients to them, who can be a check-in for them, and work alongside them together, not separately. Smaller cities may not have a department of health or overarching organizations that larger cities do, so they need to utilize the resources available to them and become more collaborative in working with other systems and agencies.

You have written recently about multiple interventions adopted by the Burlington Police Department in response to high numbers of opioid-related deaths in Vermont, including diversion-focused policies for individuals who have overdosed to enable access to treatment instead of arrest or prosecution. How have you fostered buy-in and the adoption of the approaches among your officers?

It’s taken a little while to get this right, it’s a work in progress. Here in Burlington, we have hired an opioid policy coordinator—on a bi-weekly basis, she keeps a running tally of high-risk [of overdose] civilians. We are not interested in going after low-level drug users in a criminal sense, but from a public health lens of caring about their safety. She works with the Narcotics Unit to watch out for them, and in this way has fostered buy-in. Through interactions with people on the list, the Narcotics Unit has really come around to the idea that treatment is needed, rather than an arrest.

In addition, every supervisor in my department has attended a class taught by an addiction specialist on the science of opioid addiction and why the medicine works. Once the supervisor really understands the science of it, and the difference between what works and what doesn’t, it starts to click. This basic ‘education’ is really meaningful to getting buy-in. The last step is getting the rank-and-file patrol cops to get that training as well, which we’re working on coordinating in the next few weeks.

You have spoken about using data to inform intervention approaches and outcomes tracking in your department. What do you consider the most critical data elements that your department collects and analyzes?

What experiences, either personal or professional, have shaped your approach to addressing the opioid epidemic?

My first introduction into this area was when my wife’s cousin died of fentanyl overdose. I didn’t understand what happened to her and just learning more about it really opened my eyes. Most Americans see it happening before their eyes and don’t know how to intervene.

In 1997 I became a New York City cop, and at that time the police were relentless about making the city safe. All across different spans (demographic, class, crime-level) of neighborhoods, there were huge reductions in morbidity and mortality. We learned it’s possible, and although it isn’t fully creditable to the police, people are alive today because of some of those changes that were made.

The challenge now is overdoses. We have to turn that same problem-solving mentality and relentlessness into action and get those numbers lowered. Go to what works—and in this case, it is public health interventions that work.

“Policing and the Opioid Crisis: Standards of Care” provides 10 recommendations for police departments around furthering baseline standards of care for the opioid crisis.