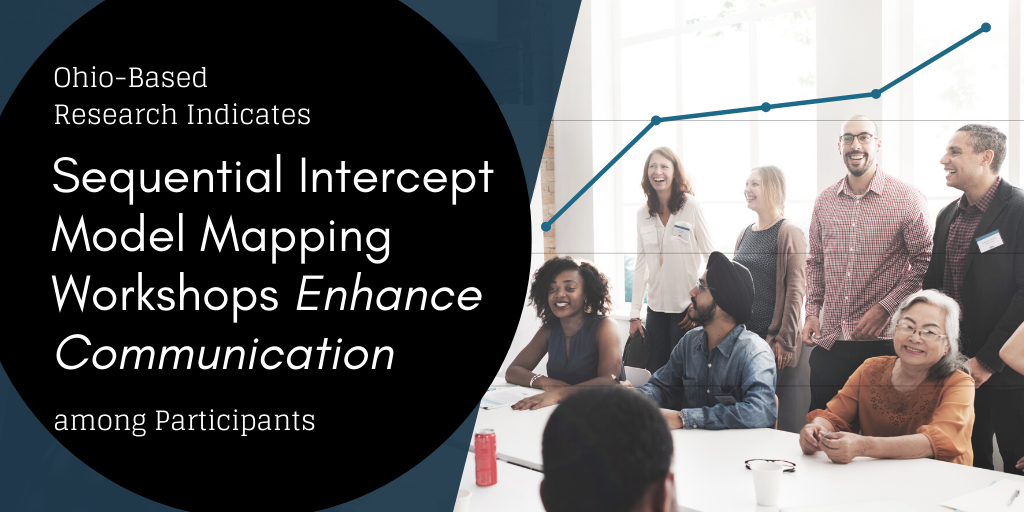 Sequential Intercept Model (SIM) Mapping Workshops are a dynamic, community–wide process designed to address the overrepresentation of people with mental illnesses and substance use disorders in the criminal justice system. Recent research out of Ohio shows that the process is well received, promotes collaboration among key stakeholders, and increases the availability of crisis services, notes Principal Investigator Natalie Bonfine, Ph.D., assistant professor at Northeast Ohio Medical University’s Department of Psychiatry.

“Mapping takes this framework and helps communities identify where they have various resources, and where they may have gaps in services, gaps in processes where connections could be made, and gaps in policies that might be helpful to guide practice,” Bonfine explains. A broad group of stakeholders participates, including both frontline staff and senior administrators from across the mental health, substance use treatment, and criminal justice systems; mayors, county commissioners, and other elected officials; people with lived experience; family members; and advocates. Bonfine’s research found that involvement of judges and people with lived experience were vital to the success of the SIM mapping process.

SIM Mapping Workshops are being conducted in communities across the United States, Bonfine reports. In Ohio, the process is overseen by the Criminal Justice Coordinating Center of Excellence, a statewide technical assistance center. To date, the state has conducted more than 40 mapping exercises, the bulk of them focused on the intersection of mental illness and the criminal justice system. Ohio has also done several SIM Mapping Workshops looking at issues specific to the juvenile justice system, and 11 communities have used the process to address opioid-related problems. The opioid mappings often involve some different players, such as county coroners and representatives from the public health and educational systems, and are geared toward reducing overdoses and overdose deaths in adults and transition-aged youth who may come in contact with the justice system. In 2017, Ohio had the second–highest rate of opioid overdose deaths in the United States.

“Mapping has the potential to be a transformative process for communities,” Bonfine believes. “They’ve identified an issue of concern in their community, and they’re working together to organize their efforts and prioritize how they respond.” The actual SIM mapping takes a day and a half, but is preceded by months of preparation. When communities identify the areas they want to work on, they typically form working groups to address them. Bonfine’s research looked at reactions to the process in Ohio about 9 months after SIM mapping was complete. She notes several key takeaways from her qualitative interviews.

Research into SIM mapping is still in its infancy, Bonfine explains. She is currently collecting data before and after participants take part in mapping workshops to see if there are changes in their attitudes toward the target populations. “We’re looking at whether mapping has an impact on attitudes and does it increase knowledge and awareness of community-based resources to address the issue,” she says.

Ideally, Bonfine would like to be able to determine whether SIM mapping plays a role in reducing the numbers of people with mental illnesses and substance use disorders who end up in the criminal justice system, or the numbers of people who experience opioid overdoses or overdose deaths, but that’s a complex issue to evaluate. “That can be a really challenging causal argument to make because we just don’t have that data,” she notes.

For now, Bonfine is cheered by the results she has witnessed thus far. She concludes, “I’ve seen overwhelming support from participants who say, ‘This is helping, this is having a direct impact in how we collaborate, how we communicate with one another, and how we address the issue.’”