At the end of this month, communities will join together as trumpeting parades and quiet observances honor the memories of U.S. men and women who died while in military service. Alongside these hallmarks of Memorial Day, there is a grief that has too often remained unspoken and unrecognized: that experienced by those left behind when a servicewoman or serviceman dies of suicide. While we celebrate and commemorate those brave lives lost in physical battles, the numerous lives lost to the raging battles of the mind are no less fallen and deserving of honor. These are the battles that continue to be fought long after the physical war is over. The issue of death by suicide among these heroes transcends all race, age, and socioeconomic factors, and the painful ripple effects of the loss carry far beyond any one family.

Now more than ever, surviving service members, Veterans, and their families (SMVF) are raising their voices to spread awareness and rally support for interventions, and their neighbors and leaders are answering the call. Prevention of death by suicide among service members and Veterans is a public health crisis that demands widespread attention and intervention, grounded in an understanding of the nature of the issues involved.

According to the 2020 National Veteran Suicide Prevention Annual Report, “Suicide has no single causative explanation or pathway; in turn, there is likely no single solution.” It is also known that most military Veterans do not receive health care through the VA system and instead seek care in community care settings. Consequently, it is imperative that community stakeholders at all levels—from the neighborhood doctor’s office to the governor’s office—unite to help combat this public health crisis.

At PRA, the Substance Abuse and Mental Health Services Administration’s (SAMHSA)  SMVF Technical Assistance (TA) Center is working across the country to support communities and states attempting to raise awareness, enact policies, and change practices to better address the specific mental health needs of SMVF. Currently, staff are coordinating two initiatives targeting the prevention of suicide among the military population within our communities: the Governor’s and Mayor’s Challenge to Prevent Suicide Among SMVF and the Crisis Intercept Maps for SMVF.

Since 2017, the U.S. Department of Veterans Affairs and SAMHSA have partnered to advance a nationwide effort to end the preventable tragedy of suicide, through both the Governor’s and Mayor’s Challenge to Prevent Suicide Among SMVF. To date, 24 communities and 35 states have stepped up to the challenge and, with guidance and support from SAMHSA’s SMVF TA Center, have formed inter-agency military and civilian teams to develop strategic action plans to end suicide among SMVF.

The overall goal of this initiative is to strengthen behavioral healthcare systems and suicide prevention services for SMVF through ongoing collaboration, increased community awareness, and the implementation of evidence-based and promising practices both locally and statewide. Priority areas of focus for the state and local efforts include identifying SMVF in the community, screening for suicide risk, promoting connectedness, improving care transitions, and increasing lethal means safety and safety planning.

Additionally, SAMHSA and the SMVF TA Center created the Crisis Intercept Map (CIM) for SMVF. Suicide prevention is collaborative work that must focus on improving the capacity of communities to recognize and intercept suicide crises before they occur. The CIM is a tool that supports this process by helping community stakeholders visualize how at-risk SMVF flow through the crisis care system, identify gaps, and build strategies for closing those gaps. The model focuses on four key “intercept points” of the crisis care system that provide opportunities for diverting at-risk SMVF to appropriate and effective prevention and support services. 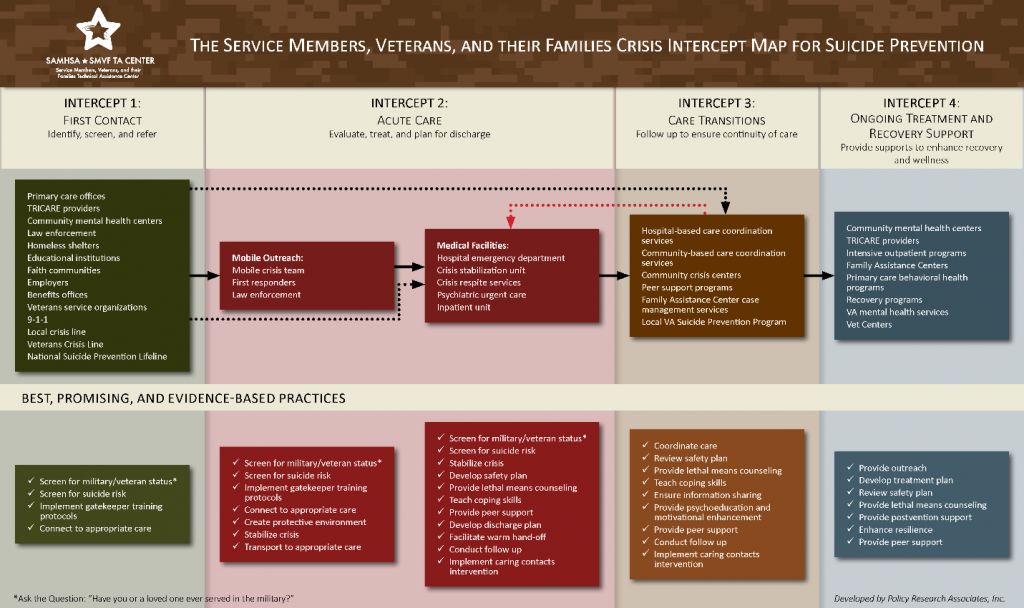 In addition to creating a graphic map of a community’s crisis care system, the mapping process serves to:

SMVF TA Center staff have engaged 36 communities from across the country in CIM TA since 2018 and are looking forward to expanding our reach to support SMVF and improve the systems that serve them.

Death by suicide among SMVF affects all communities. As we prepare to honor and commemorate the lives of those brave warriors who served and died in battle, also remember those who lost their lives in the battle for recovery from psychological wounds, and honor them by taking action. Prevention and intervention require community effort and need involvement from all community members, as does addressing the needs of the family and community before, during, and after the tremendous loss of loved ones. On this Memorial Day, when you remember all our fallen soldiers and the loved ones who lost them, make a commitment to learning more about those neighbors still fighting for their lives after serving our country, and how you can, in turn, serve them or their families year round.

For additional help on postvention resources, please see the links below.

After a Suicide Toolkit for Schools (PDF, 401 KB)

After a Suicide Services and Observances (PDF, 935 KB)