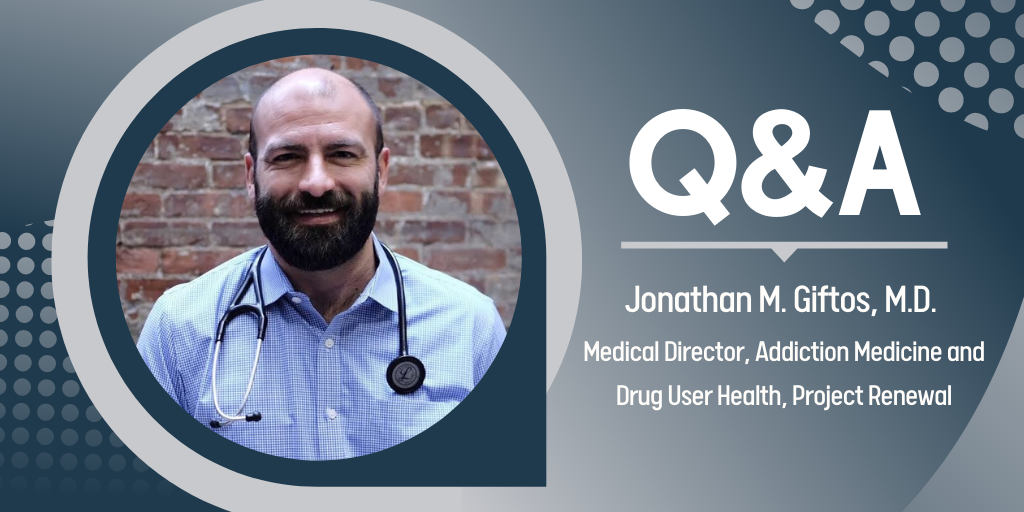 As former clinical director of substance use treatment at Rikers Island for New York City Health and Hospitals/Correctional Health Services, you oversaw diversion, harm reduction, treatment, and reentry services for incarcerated patients with substance use disorders. What drew you to working with this population?

My interest in working with this population built up over the span of a decade. When I was working at Fordham University as director of service learning in 2005, I developed relationships with community-based organizations in the Bronx and across New York City. I also started volunteering at Abraham House in the South Bronx, a small residential facility operated by nuns that served as an alternative to incarceration for people who were convicted of nonviolent offenses, most of which were drug-related.

Around that time, I decided to go to medical school, so I started working at the Albert Einstein College of Medicine in the Department of Family and Social Medicine. This clinical department sought to understand the impact of social forces on people’s health. And one of the significant social determinants of people’s health was criminal justice exposure.

I went to medical school at Mt. Sinai and came back to the Bronx to do my residency in social medicine at Montefiore Medical Center. The community health center I worked in was right next to the courthouse in the South Bronx. One of the physicians decided to study the impact of criminal justice exposure on our patients. And what we found was that 50 percent of the patients in our clinic had a loved one who had been incarcerated, which revealed to me the overwhelming presence of criminal justice exposure in the lives of my patients.

Fast forward to 2015, when some of my former colleagues began overseeing the transition of health care on Rikers Island from a for-profit vendor to New York City Health and Hospitals, the city’s public hospital system. I was recruited to work in the jail system as a clinician educator, seeing patients and teaching residents rotating through correctional health placement.

You were also the medical director of the opioid treatment program for the New York City jail system. In what ways is the criminal justice system ill-equipped to meet the needs of people with opioid use disorders?

The criminal justice system is not really oriented toward health, wellness, or safety. You can incorporate services into correctional settings, for example, to reduce the harm of people’s incarceration, but the settings themselves are decidedly nontherapeutic; they’re really designed for security or punishment.

So, as the medical director of the opioid treatment program, we consistently messaged that people with opioid use disorder who are incarcerated are at grave risk of terrible health outcomes. In some cases, untreated withdrawal symptoms can lead to death due to dehydration or exacerbations of other health conditions. It also leads to tremendous suffering that might drive people to self-medicate to alleviate that suffering, which could lead to an overdose. We also know that people with an opioid use disorder who are incarcerated and withdrawn from opioids, but not offered any further treatment with medications, are often at increased risk of death by overdose when released because they’re leaving with a reduced tolerance.

So, when I was managing this program, our consistent message was that “These medications [methadone and buprenorphine] reduce suffering and death.” But we were also very clear that jail is not the ideal place for somebody seeking treatment for opioid use disorder, because it’s really anti-therapeutic in so many other ways. The harms of incarceration, I think, really outweigh any possible benefits for my clients and patients.

In your new role as medical director for addiction medicine and drug user health at Project Renewal in New York City, why is it important to provide low-threshold services as an alternative to involvement in the criminal justice system?

When I was working at Rikers, I saw hundreds of people every year return to jail for a violation of their parole. Almost universally, those people were in some form of crisis. Many often had been released recently from prison to the chaotic shelter system because they had no place to live. Or they were released without a clear plan of how they were going to work or support themselves, or to a family experiencing a lot of conflict or other stressors. The patient’s mental health might have also decompensated due to disrupted access to psychiatric care. And when people would experience these various crises, they might return to substance use. They might then struggle to meet the conditions of their parole and be rearrested. What drew me to working in the community was that I really wanted to think about making services accessible enough for people in crisis. I wanted them to know how to find services when they were ready for help and to be able to get what they needed.

You may not be ready to check yourself into a residential treatment program for weeks or months, especially if you have a job or a family for whom you need to care. When services require people to make dramatic commitments as a condition of access, commitments that they may not be ready for, then I would consider those to be inaccessible services. So, Project Renewal works really hard to offer people what they need and what they’re ready for (e.g., housing, harm-reduction services, treatment, jobs training), while always keeping the door open for people to engage more deeply. Part of my job is to continue to build out harm-reduction and treatment services that respect people’s dignity. We don’t shame people; we acknowledge that people have experienced trauma, and we work to avoid retraumatizing them.

What can jurisdictions that may not have robust diversion and low-threshold programs do to better assist individuals in the community who need services?

I think it’s a matter of investment. I realize that New York City is a city with resources, but we spend a lot on policing and incarceration. So, I think that these conversations are really about reallocating resources towards health, safety, wellness, and housing. When a community says they can’t fund health-based alternatives, I think what they’re saying is that they’re choosing to fund criminal justice-based interventions instead. So, it’s a political conversation, and I know it’s a hard one, but it’s an important one to have. My personal view is that it takes time, effort, and organization, but we have to be putting money into health, housing, and jobs. We must try to minimize contact with punitive experiences that, for many, simply retraumatize people, add a layer of shame, and create harm from a health and social standpoint. Punishment and harm do not make our communities healthy and whole. So, these are difficult conversations to have, but I think they’re important to have everywhere.