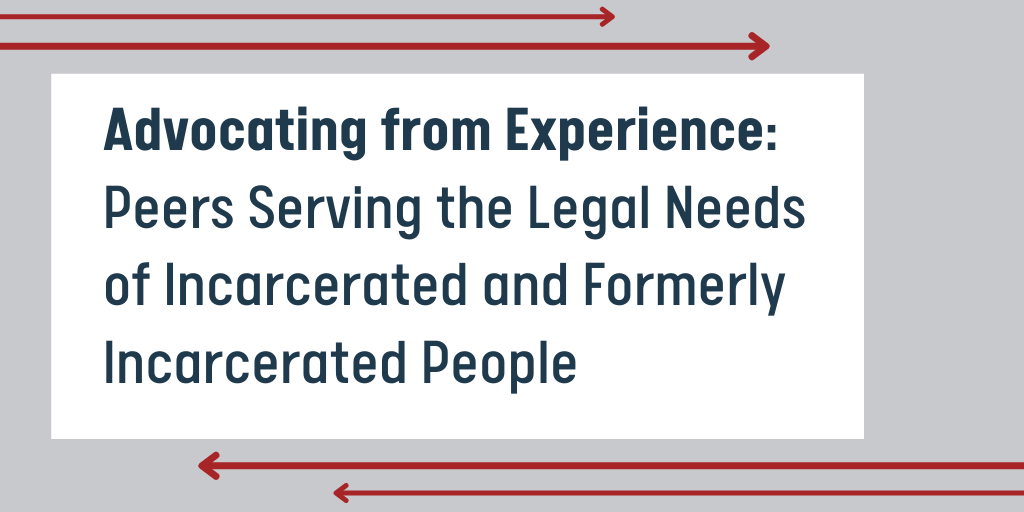 Legal Services for Prisoners with Children (LSPC), based in Oakland, California, began serving women who were incarcerated more than 40 years ago, when their needs were largely invisible. The program, staffed in part by formerly incarcerated people, began in response to the large numbers of women being incarcerated as a result of the war on drugs. But as it pursued measures to improve conditions at a more systemic level, the organization went from serving individuals to joining class action lawsuits, writing policy manuals on topics ranging from parental rights to sentencing reform, and creating other resources to help both women and men who are incarcerated and their families, in California as well as nationwide, according to Dorsey Nunn, executive director of LSPC and co-founder of All of Us or None (AOUON). Nunn, himself, was charged, convicted, and sentenced to life in prison when he was 19 years old. In 1984, at age 33 and after 3 years on parole, he was discharged.

“When we started hiring formerly incarcerated people to work in the office of Legal Services for Prisoners with Children, we began daydreaming about what it would be like to have a movement that was about us and led by us,” Nunn explains. That daydream informs the wide range of work that LSPC does to benefit the lives of people who are justice involved; from making systemic changes in legislation and providing courtroom representation, to promoting community connection and individual wellbeing.

LSPC has pushed for policies to help those who are currently incarcerated, such as ending the practice of shackling pregnant women during transport. Part of this effort involved LSPC completing a review of all relevant polices and submitting a report to the Senate Committee on Public Safety.[1] “It took us two or three efforts in the legislature to get them to change the law so they wouldn’t shackle pregnant women while they were being transported to the hospital,” Nunn explains.

Additionally, LSPC was involved in the campaign to pass California Proposition 36, which mandates treatment in lieu of incarceration for non-violent drug offenses. “When we passed Proposition 36, it reduced the prison population in the state of California for women by 10 percent,” according to Nunn.

Today, LSPC is monitoring at least 10 bills that will impact incarcerated people and their families. They are holding a virtual organizing event in May called Quest for Democracy, where hundreds of formerly incarcerated and convicted people and their family members and allies will convene online for community, advocacy training, and legislative visits.

On the legal front, LSPC engaged in a lawsuit that ended long-term solitary confinement in Pelican Bay, California’s only super-maximum-security prison. In addition to providing important legal counsel on the case, LSPC coordinated a community rally to help spread the word and catalyze systemic change.[2]

LSPC at its core aims to make individual lives better. LSPC receives thousands of letters from incarcerated people and tries to address them as best it can. Men often write about the collateral consequences of conviction and conditions of confinement, Nunn recalls. Whereas women most frequently write to ask, “What’s going to happen to my children?” According to Nunn, the separation from their children adds a greater degree of trauma. In its early years, LSPC ran a program for women who had been abused and killed their abusers, but over time the organization has observed shifts in the needs of the women they work with based on the changes in the laws and policies that lead to their incarceration. Nunn explains, “Women weren’t going to prison in massive numbers until we had a drug war, and then it just radically increased. We figured they were suffering from trauma before they even went into prison.”

A popular annual event is the Community Giveback Day, where LSPC and other organizations, including AOUON, provide toys to children whose parents are incarcerated. There is a lot of compound trauma when parents of young children have been incarcerated for extended lengths of time. The Community Giveback Day is fun for the children, but really it is for the parents, particularly those whose children are grown. “We want to make sure we continue to hold that space so that when people come home from prison, they can still have a relationship with their community,” Nunn notes. This event helps people reengage and feel like they have a place where they fit.

As a formerly incarcerated person, being a peer and working to serve currently and formerly incarcerated individuals has brought meaning to Nunn’s life. At the end of the day, Nunn recognizes that simply staying out of prison would have been a major accomplishment. “But my life turned out to be much more significant than just that,” he says. Through LSPC, Nunn has provided an inspiring and supportive example and changed the narrative on what it means to be formerly incarcerated.

While LSPC has had its successes, there are many areas where Nunn sees the need for continued work. Unfortunately, Nunn sees a lack of continuum of care for people with substance use disorders who do end up incarcerated. They are not being treated in prison or upon their release, he notes. Nor are their mental health challenges being addressed. “We send people with mental health needs to prison instead of helping them,” Nunn says, “because we haven’t built up the apparatus to address mental health in the community.”

Facing such unmet and evolving needs, LSPC programing continues to expand. In December LSPC will open their first transitional house that will focus on people who experienced long-term incarceration. This program is intended to address a growing crisis of elderly individuals experiencing homelessness upon release following extended prison terms. Formerly incarcerated elders experience unique challenges: in addition to increased rates of homelessness and unemployment, “they don’t get Social Security or anything else that they would have acquired as a result of working,” notes Nunn. These challenges then translate into worsening health and decreased wellness across the community.

Though the victories come in slow, and systemic change is painstaking, Nunn is tireless in his commitment to the work. LSPC will be there, he says, fighting the good fight to restore human civil rights to incarcerated individuals and to bring healing to communities, families, and returning individuals no matter how long they’ve been away.

[2] March E-News: Are You Ready for Quest for Democracy? (prisonerswithchildren.org)