Asian Prisoner Support Committee (APSC) is a community-based organization in Alameda County, California, providing culturally specific programming for Asian and Pacific Islander (API) people in the United States who are incarcerated or formerly incarcerated. Through a network of staff and volunteers, many of whom have experienced incarceration, they offer in-prison education programs and reentry planning, as well as community-based reentry services.

APSC interweaves direct supports for people impacted by the criminal legal system with opportunities for facilitated engagement and learning about the diverse ethnic and cultural histories that comprise API identities in the United States. APSC’s in-prison education program, called Restoring Our Original True Selves (ROOTS), grew from the work of Eddy Zheng, Viet Mike Ngo, and Rico Riemedio, three API men who advocated for an Ethnic Studies curriculum for people in California’s San Quentin State Prison while incarcerated there. Students attend weekly classes on topics such as migration histories, intergenerational trauma, mass incarceration, racial justice, physical and behavioral health, leadership, and reentry through an API lens. Participation in ROOTS is open to everyone regardless of ethnic background, including those who identify as API, “Other,” or API allies. 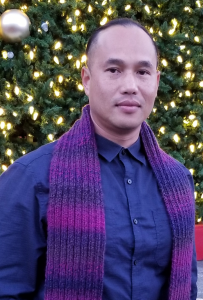 Borey “Peejay” Ai, community advocate for APSC and a ROOTS facilitator, recounts the time before he enrolled in ROOTS. “I didn’t have a sense of identity growing up, and I found my identity through the program. I learned about my ancestors, learned about what’s important to us, our values. It reminded me of my culture that I had forgotten because I was trying to survive in my environment as a kid.” Like many ROOTS participants, his childhood included significant traumas associated with his family’s migration history. His family survived the Khmer Rouge genocide, and after relocating to a refugee camp in Thailand, arrived in the United States as refugees left to navigate the nested challenges of urban poverty without supports for integration. Peejay received a life sentence while still a teen, having been charged as an adult for a crime he committed when he was 14 years old. However, after serving 20 years in prison, he was able to successfully apply for parole.

ROOTS offers students opportunities to learn about and discuss common histories among API individuals who are incarcerated. Participants share about personal experiences of migration, war, genocide, poverty, and intergenerational trauma, and discuss how these experiences led to their incarceration. Weekly meetings are facilitated by ROOTS graduates, APSC volunteers, and college and university faculty. Engaging with these histories and reconnecting with cultural identities that have been lost through migration and integration are part of a restorative process to support participants’ recovery, build relationships, and allow students to grieve. “ROOTS is about healing,” Peejay explains. “It’s not just about learning through curriculum, learning through presentations and lectures. We also provide a platform for folks to heal from the trauma,” a process which informs reentry planning for those who will be released eventually.

APSC’s reentry program, called ROOTS 2 Reentry (R2R), builds on networks and strengths developed in the in-prison curriculum. “Folks who have been through ROOTS consider each other family. We are a community that is very close because we share so deeply over trauma,” Peejay shares. The relationships forged in the course form a community that a person can connect with upon reentry. In addition, ROOTS fosters leadership skills and empowerment through its rehabilitative approach. Peejay says, “There’s a sense of responsibility once you know who you are and where you come from.” Through participation in the ROOTS program, he went to college, became certified as a counselor with specializations in addiction treatment and violence interventions, and is now an active leader and role model in his community.

R2R offers navigation supports to help participants obtain identification, work permits, and health insurance; a referral network of partners to meet needs related to housing, food, employment, education, clothing, and hygiene; transportation to appointments; and pathways for reconnecting socially in the community through community service, networking, and other immersion activities. Peers meet individuals at the prison when they are released, engage in one-on-one care management meetings, and offer group sessions and presentations (now via Zoom due to COVID-19). APSC staff also provide supports to participants and their families who are facing risk for deportation upon release. Of those who participated in R2R in 2019, 3 percent returned to prison, compared with the most recently reported 3-year recidivism rate of 24 percent within the California state prison system.

API people represent a relatively small percentage of the overall prison population, but standard data collection methods about race and ethnicity, which are not disaggregated for API individuals, can obscure high risk for arrests and incarceration among some API groups.[1] [2] [3] [4] [5] Data about API people in the criminal legal system are typically included in an “Other” category, along with American Indians, Alaska Natives, and persons of two or more races who do not identify as Black, White, or Hispanic, limiting understanding of the diversity of API experiences in the criminal legal system and potentially enabling the need for culturally specific interventions to be overlooked. For example, while API individuals represent only a subset of the total prison population that identifies as “Other” (12 percent),[6]  in Oakland, where APSC operates, specific ethnic groups within Southeast Asian and Pacific Islander youth are among those with the highest arrest rates when data on API people are disaggregated.[7] [8] [9]

In response to COVID-19 restrictions on convening group classes inside in the prison, APSC is piloting new approaches to delivering ROOTS programming in other facilities, including a by-email literature club in the California Institute for Women and Central California Women’s Facility, where students engage in one-on-one study of books of their choosing with a facilitator; creation of a second anthology of writings produced by API people who have experienced incarceration; and an in-prison newsletter.

Looking forward, APSC is currently working to expand its programming to other California prisons and jails. As the organization continues to grow, they have plans to increase training opportunities for and representation of formerly incarcerated people in their leadership, including women and non-binary, transgender, and gender non-conforming people, to continue addressing the need for culturally specific resources for marginalized groups.