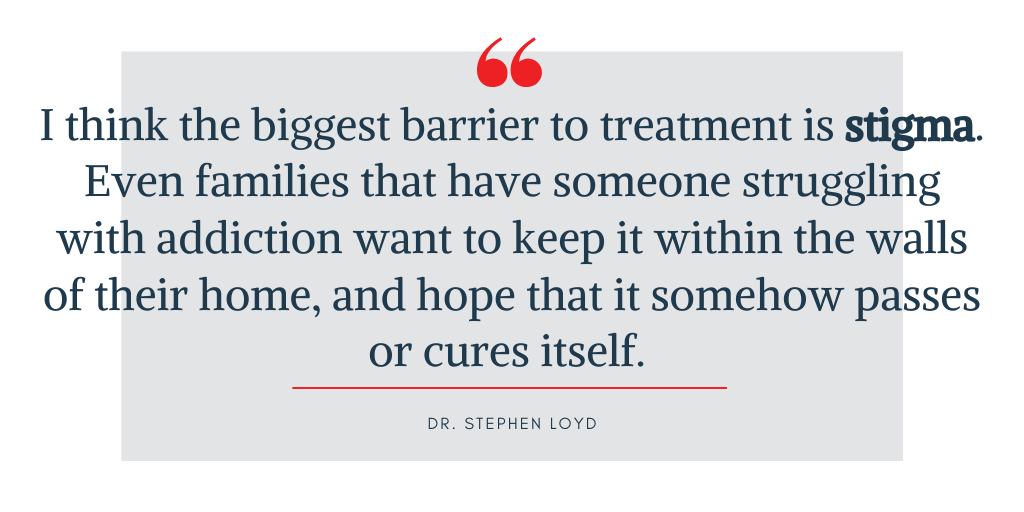 During his medical residency, Stephen Loyd, M.D., went from taking half a Vicodin to quell his depression and anxiety to taking the equivalent of one hundred pills a day. He was hooked. Though he was doing well at work, his home life began to suffer. He began stealing pills from people’s homes and doctor shopping to get prescriptions. Eventually, he turned to the streets.

“My father intervened with me,” says Dr. Loyd, who today is the medical director for two residential substance use treatment centers—JourneyPure at the River in Murfreesboro, Tennessee, and The Next Door in Nashville, which treats women of low income with significant trauma histories. He received 3 months of residential treatment at the Center for Professional Excellence in Nashville, which treats doctors, lawyers, and judges, and had 5 years of aftercare through the Tennessee Medical Foundation as part of their physician wellness program. He still participates in the aftercare program on a voluntary basis.

“My own experience shapes what I do every day,” Dr. Loyd says. He gleaned several key takeaways, including the following:

He also identified a number of barriers to treatment, in addition to a lack of resources. “I think the biggest barrier to treatment is stigma,” Dr. Loyd says. “Even families that have someone struggling with addiction want to keep it within the walls of their home and hope that it somehow passes or cures itself.”

Once individuals and families decide to seek help, they run into the problem of knowing how to access treatment. Does insurance pay for it? How does the insurance work? Where can I go? What are the types of treatment that work best? Dr. Loyd refers to the addiction treatment system as the “Wild West” and decries the fact that so few programs offer MAT, even though it is acknowledged to be the evidence-based treatment of choice.

Over the years, Dr. Loyd has worked with numerous patients who have criminal justice involvement. He sat on a drug court in east Tennessee before moving to Nashville and, as assistant commissioner of substance use services in Tennessee, he oversaw the state’s drug court program.

Right now, his focus is on trying to bring substance use treatment into jails. “I’m always amazed at the criminal justice system because they lock people up for a certain amount of time and then they turn them loose and tell them to go out and do better,” Dr. Loyd says. “But now they have a criminal record, they don’t have a stable income, and they haven’t received any treatment for their addiction.”

Treating people for their addiction in jail is the humane thing to do, but it’s also the cost-effective way to go, Dr. Loyd believes. When a previously employed person is incarcerated, she or he is removed from the tax base, plus taxpayers then end up paying for all sorts of ancillary services for the families that individual leaves behind, including, in many cases, the cost of foster care. “So, you reach a tipping point where you can’t afford to provide the services that you need for these people who are locked up,” Dr. Loyd adds.

Dr. Loyd uses his own experience of addiction to guide his work with patients. He understands the desire to quit and the difficulty in doing so. “I can’t tell you how many mornings I stared at myself in the mirror and bawled my eyes out because I couldn’t quit and I wanted to so badly,” he says. “And then it was a handful of pills and off to another day.”

What keeps him going today is the fact that he sees such dramatic changes in the people he treats. “I get to watch people change their lives every single day,” Dr. Loyd says. “I never got to do that in my regular profession as an internal medicine doctor working in the hospital. But I get to see it every day in what I do now.”