Creating a Model for Reducing the Justice Involvement of People with Behavioral Health Disorders: Not an Overnight Success

Douglas County, Kansas, has reduced the number of people with serious mental illness (SMI) who are booked in the Douglas County Correctional Facility (DCCF) by 56 percent in 4 years. In 2014, 18 percent of those in the jail were identified as having SMI; by 2018, the percentage was 8 percent. The national average is 17 percent.

Kathy Rowings, associate program director for justice for the National Association of Counties, praised the county for its work during a public event in May 2019. “From training law enforcement, to recognizing the signs and symptoms of individuals in mental health crisis, to partnering with local behavioral health providers to embed mental health staff and case managers in the jail, to supporting people in [the] Behavioral Health Court [of Douglas County], and addressing crises in the community before a person is even arrested, Douglas County has shown that having this really sort of massive impact takes more than one program or one path, but that it can be done and it is achievable.” 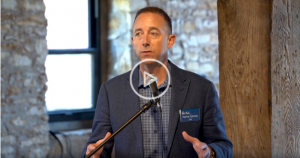 Rowings also attributed the success to leadership in Douglas County and the partnerships that have been developed across traditionally siloed systems. “Douglas County is not only a model for other counties in Kansas, but really for counties across the country,” she said at the May event.

Douglas County is located between Kansas City and the state capital of Topeka and has a population of about 110,000 people. The main city in the county is Lawrence, which is home to the University of Kansas (KU) and Haskell Indian Nations University. Other cities located in the county include Baldwin City, home of Baker University; Eudora; and Lecompton.

“The Douglas County Sheriff’s Office has had a longtime partnership with the University of Kansas and [the] Bert Nash [Center],” McGovern said. “For example, we’ve provided social work students with hands-on learning experiences and classes at the Correctional Facility, and they’ve provided us with their expertise and research. For more than a decade, [the] Bert Nash [Center] has provided Mental Health First Aid training to deputies and corrections officers.”

In 2010, the sheriff received a 2-year Justice and Mental Health Collaboration Program grant from the Bureau of Justice Assistance to increase clinical services to full-time and to add a full-time mental health reentry case manager. The county now funds both of the positions.

In 2014, with the DCCF population rising, Douglas County leadership was concerned that people with mental illness were overrepresented in the facility. Working in partnership with KU, the county initiated a study of the population by Huskey and Associates, nationally recognized juvenile and criminal justice consultants. Through this work, Douglas County established accurate baseline numbers of people with mental illness coming into the correctional facility. The Huskey and Associates study, completed in spring of 2015, found that 18 percent of people booked into the facility in 2014 were diagnosed with SMI. KU and Huskey Associates recommended the establishment of a Behavioral Health Court and efforts to divert people with serious mental illness from the criminal justice system as early as possible.

The sheriff, with the support of KU and the Bert Nash Center, applied for a Justice and Mental Health Collaboration Program expansion grant from the Bureau of Justice Assistance in April 2015 with 3 goals in mind:

The grant was awarded in September 2015. During the next year, staff was hired to implement the innovative Assess-Identify-Divert (AID) program, the Criminal Justice Coordinating Council was established, and the Behavioral Health Court of Douglas County launched as a pilot project.

Meanwhile, the Lawrence Police Department established the Douglas County Crisis Intervention Team (CIT) Council in 2014, which included representatives from all of the county’s law enforcement agencies in addition to community stakeholders. In 2015, the sheriff and police chiefs committed to training staff in CIT. To date, more than 60 percent of law enforcement officers in Douglas County are CIT-trained.

In 2015, Douglas County partnered with the National Association of Counties, the Council of State Governments (CSG) Justice Center, and the American Psychiatric Association Foundation to participate in the Stepping Up Initiative, a national program that aims to reduce the number of people with mental illness in jail. In conjunction with this initiative, Douglas County leaders implemented a number of changes to help realize their overall goals. These included hiring a criminal justice coordinator, a criminal justice data analyst, and a director of behavioral health projects; integrating the Brief Jail Mental Health Screen into its jail system; funding the Behavioral Health Court; and establishing a pretrial release program. The CSG Justice Center recognized these efforts in June 2018 by naming Douglas County as one of seven “Stepping Up Innovator Counties.”

All of these efforts over the years have combined to help provide appropriate alternatives to incarceration for people with mental illness. “The reduction cannot be attributed to one or two initiatives, but to the whole of the effort to change the culture of the criminal justice system through data sharing and collaboration,” said Criminal Justice Coordinator Robert Bieniecki. “This has led to better outcomes through improved care coordination and reduced stigma.”

Anna Witt, 29, is among 11 individuals who have graduated from Douglas County’s Behavioral Health Court program. Her father, Mark Witt, believes it saved her life. “We just couldn’t get her the help she needed. She’s doing incredible now,” he said.

Anna speaks of the moment when she was arrested and booked into DCCF as the darkest point in her life at the end of a hard stretch. Five years earlier, she was addicted to prescription drugs and recently out of a tumultuous relationship, and had lost her job and her home. She moved in with her parents, beginning a long period of depression and addiction, spent mostly in bed, that culminated in her arrest.

Anna described the Behavioral Health Court program as one of “the best experiences of her life.” Through the program, she received case management, therapy and supportive housing. She also earned her high school diploma. Since graduating from the program, she has moved into an apartment and is working at two jobs. “I’m doing amazing,” she said during an interview this summer, “but, that doesn’t mean life is always great. Just because I was in this program, doesn’t mean it fixed everything. It gave me tools to help on a daily basis.”

Having demonstrated success in diverting people with mental illness away from incarceration, Douglas County leaders are now working to see if they can reduce the number of people with addiction in DCCF as well. A full-time drug and alcohol therapist began working at the jail this year, and this fall, the sheriff plans to start a medication-assisted treatment program for those who are discharged. The county is also expanding its work with supportive housing projects; this year, it provided funding to bring the nonprofit “Artists Helping the Homeless” to Douglas County. This program will provide respite housing and support for men suffering homelessness, mental illness, and addiction. Additionally, the county plans to break ground this fall on a recovery campus that will provide services and housing for those with mental and behavioral health needs.

Patrick Schmitz was hired as CEO of the Bert Nash Center in 2017. Douglas County’s efforts to help those with mental illness and addiction was what drew him to the community, and he’s proud of the work being accomplished. “In Douglas County, we really do make a commitment to improving the lives of everybody that needs help,” he said during the same May 2019 event where Rowings spoke, “and it doesn’t matter who they are. We really make that effort to do what’s necessary to improve their lives and to get them into the least restrictive environment.”