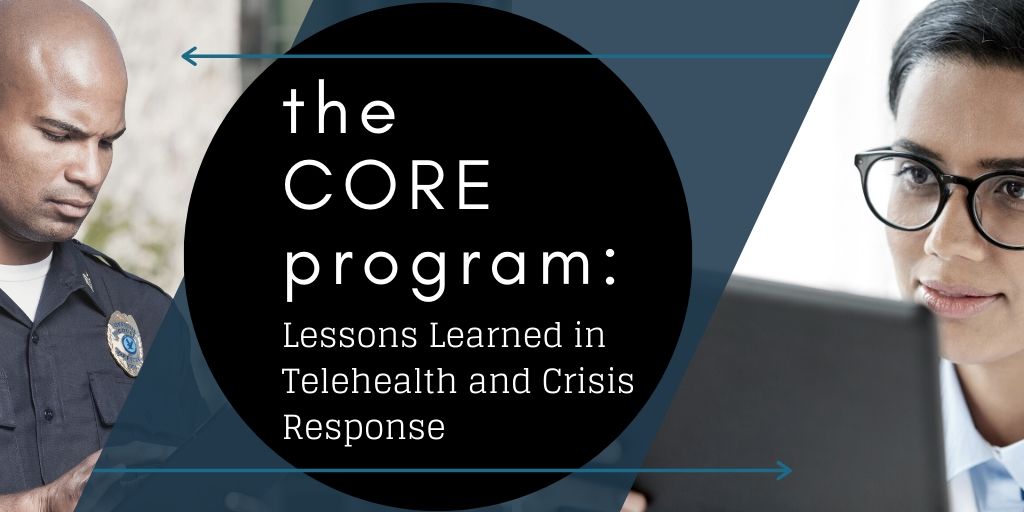 The CORE Program: Lessons Learned in Telehealth and Crisis Response

Harris County, Texas, which includes the city of Houston, has a population greater than the population of 24 individual states. The Harris Center for Mental Health and Intellectual and Developmental Disabilities, the county’s safety net provider, provide 21 master’s-level clinicians to ride along with Harris County Sheriff’s Office deputies and Houston Police Department officers in what it calls Crisis Intervention Response Teams (CIRTs) to respond to people with mental illness in crisis. But, on some shifts, they may have only one CIRT team between the two law enforcement agencies covering a population of nearly 5 million people.

Enter the Clinician and Officer Remote Evaluation (CORE) program, which Harris Center CEO Wayne Young, LPC, M.B.A., FACHE, calls “a force multiplier.” Begun as a pilot program in the fall of 2017, CORE is “a strategy of responding to mental health crisis calls using a tablet and a HIPAA-approved technology platform to connect a law enforcement first responder with a mental health clinician in the community at the time of the 911 dispatch,” Young explains. The program was tested in a three-phase pilot program (30 calls, 30 days, and 1 year) with the Harris County Sheriff’s Office and is now in the process of being more widely implemented. “My goal would be to have a tablet in the car of every law enforcement officer in Harris County,” Young says.

The process is fairly straightforward. When a deputy equipped with a tablet responds to a call that may involve a person with a mental health need, they offer the individual the opportunity to speak with a clinician using a telehealth platform called Lifesize. The clinician located at the Harris Center helps the officer determine the appropriate disposition for the individual. This may include sending out a mobile crisis team, connecting or reconnecting the person to a case manager, or providing a follow-up call from the county’s crisis line. The goal, Young explains, is to avoid unnecessary hospitalization or incarceration. Avoiding unnecessary hospitalization is especially critical, Young believes, as hospitals continue to be overwhelmed with COVID-19 patients. Interim evaluation results show the program is working.

In the evaluation of phase III, which is being conducted by the University of Houston–Downtown with funding from Arnold Ventures, CORE coverage was provided from 6 a.m. to 11 p.m. 7 days a week, with two clinicians assigned to assist 20 deputies. As the program ramps up, there will be 10 clinicians and 100 deputies providing coverage 24/7, according to Young. Arnold Ventures also funded the publication of an implementation guide, which describes CORE and similar telehealth programs in other areas of the country. The guide covers such areas as funding, consent, and the importance of building relationships.

In Harris County, some of the funding for the purchase of the tablets came from a state grant. The Harris Center had enough licenses in its current telehealth program to cover the costs for the Lifesize platform. The county provides clinician time at a significant cost savings over the CIRT program, Young explains. For the cost of one clinical co-responder on the CIRT team, the Harris Center can remotely support 10 to 15 deputies with a tablet. The cost of a 24/7 CORE team to support 100 deputies is $905,000.

The CORE pilot did uncover some important lessons. Not all geographic areas had equally good cell reception, so the Harris Center worked with their provider to try to increase coverage. In addition, there were problems with noise and lack of light for deputies using the tablets. The program purchased portable two-way speakers to assist in some instances (e.g., road or crowd noise) and clip-on lights to help illuminate the deputy and the individual, especially at night. They added protective cases to the tablets.

The need to obtain consent for telehealth services varies from state to state. Though not yet mandated for this particular use by Texas law, in Harris County, deputies capture verbal consent via their body cameras, and the clinician obtains written consent via a form appearing on the tablets. Individuals sign with their fingers.

One of the key lessons learned was the importance of having buy-in at the top and of developing good relationships between law enforcement and behavioral health personnel. In Harris County, the Harris Center and Sheriff’s Office have partnered together on behavioral health and criminal justice initiatives for more than 20 years, Young recounts.

“I don’t know any law enforcement agency that doesn’t struggle with the management of calls related to mental health or mental illness,” Young says. “So, I have found people are often responsive to resources and support. I think starting small, building rapport, developing relationships, and addressing the officer’s pain points are the keys to a successful program,” he concludes.