Editor’s Note: The following article explains how one jurisdiction has incorporated the Brief Jail Mental Health Screen into its jail intake process to more comprehensively identify and serve people with mental illness coming into the County jail. Criminal Justice Coordinator Robert Sullivan provides a first-hand account of their work:

Like so many parts of the country, we in Johnson County, Kansas, have become increasingly concerned with the frequent number of encounters our criminal justice system was having with individuals exhibiting symptoms of severe mental illness (SMI).  We recognized, early on, that this was a shared problem and began implementing a number of innovative solutions in response.  What we were not doing, despite all of our efforts at diversion, was accurately assessing how many individuals were falling through the gaps and landing in our jails. 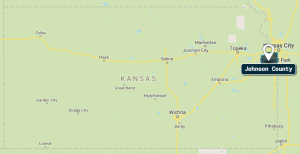 Johnson County, KS, is home to approximately 580,000 citizens, contributing to about a quarter of the total population in the Kansas City Metropolitan area. Johnson County has 20 cities and townships, 17 law enforcement agencies, and two adult detention centers for a combined total of 1,081 beds, and staffing for up to 800 inmates. Last year, Johnson County Jail’s average daily population was 760.

So, in April 2015, the Johnson County Board of Commissioners joined the National Stepping Up Initiative. Stepping Up is a collaborative effort led by the National Association of Counties, Council of State Governments Justice Center, and the American Psychiatric Association Foundation.  When our board signed onto and publicly launched Stepping Up, it signaled to the community and local stakeholders that our leadership was committed to reducing the number of people with mental illness in our jails. We began to turn our attention to the following objectives: creating a system-wide agreed upon definition of recidivism; using electronically collected data; collecting baseline data on the general population in jail; and, disseminating routine reports that are generated by a county agency, state agency, or outside contractor.  We began exploring four key measures:

To aid in the gathering of our baseline data we utilized our Justice Information Management System (JIMS). JIMS is a fully integrated criminal justice record management system built by Johnson County in the early 1990s.  It collects information about individuals from the point of booking to release from jail, or termination from probation. JIMS gives us the ability to cross-reference about 28 years of jail data and 24 years of district court case information.

Getting Data from the Brief Jail Mental Health Screen

In 2016, we integrated an electronic version of the Brief Jail Mental Health Screen (BJMHS) into our jail’s initial booking process to capture baseline data. The BJMHS is a validated mental health screen developed by Policy Research Associates, Inc. to help jurisdictions identify individuals who might be in need of further mental health evaluation. It consists of only eight questions, takes about 3 to 5 minutes to complete, and does not require the person conducting the assessment to be a mental health professional.

Prior to the implementation of the BJMHS, our data development only consisted of a one-way data match between our community mental health center and JIMS, an analysis of the people entering jail referred to services, and the number of detainees prescribed psychotropic medication while in jail. This method posed two problems: first, we believed it only captured our most vulnerable population, and second, our jail has a very high churn rate—65 percent of pretrial detainees are released within 48 hours or less. Without a mental health screen at the point of booking, many individuals were at risk of reentering the community before they could be connected to services. The implementation of the BJMHS changed that, and gave us an opportunity to connect these individuals to care.

The JIMS department built a data extraction report, so BJMHS data can be extracted on demand and shared with partners system-wide. Because of JIMS, we have the ability to leverage BJMHS data with multiple datasets. For example, we track data by individual police departments, booking types, and charge descriptions, monitor lengths of stay for detainees with symptoms of severe mental illness, and determine the overall prevalence rate of severe mental illness.

The BJMHS has provided us with a realistic assessment of Johnson County’s capacity to serve this population and the resource commitment required to conduct effective outreach.  For example, Johnson County averages 42 bookings a day.  Of those, there are approximately 10 individuals flagged for further evaluation.  However, after drilling deeper into the data, we recognize only 60 percent of flagged individuals are Johnson County residents.  The remainder reside in the greater metropolitan area, other parts of Kansas, or another state.  Knowing this allows us to target our limited resources more effectively.

And finally, the BJMHS has provided us with the ability to track key measures.

Incorporating an electronic version of the BJMHS into our jail’s initial booking process has helped us gain new insights, leverage diverse datasets, and share data with community partners, so criminal justice and human service agencies can identify which individuals are having frequent contacts with multiple systems. Johnson County’s cooperative efforts have encouraged agencies to seek new opportunities for collaboration and service integration, resulting in new opportunities for cost savings and increased human outcomes.

Robert Sullivan is the Criminal Justice Coordinator for Johnson County, Kansas. He provides support for the County Manager’s Office on all criminal justice-related matters and staff support for the Criminal Justice Advisory Council. Implementation of the Brief Jail Mental Health Screen would not have been possible were it not for the efforts of Jessica Murphy, Team Leader for the Johnson County Mental Health Center’s Emergency Services, Scott Lorimor, JIMS Department, and the Johnson County Sheriff’s Office.