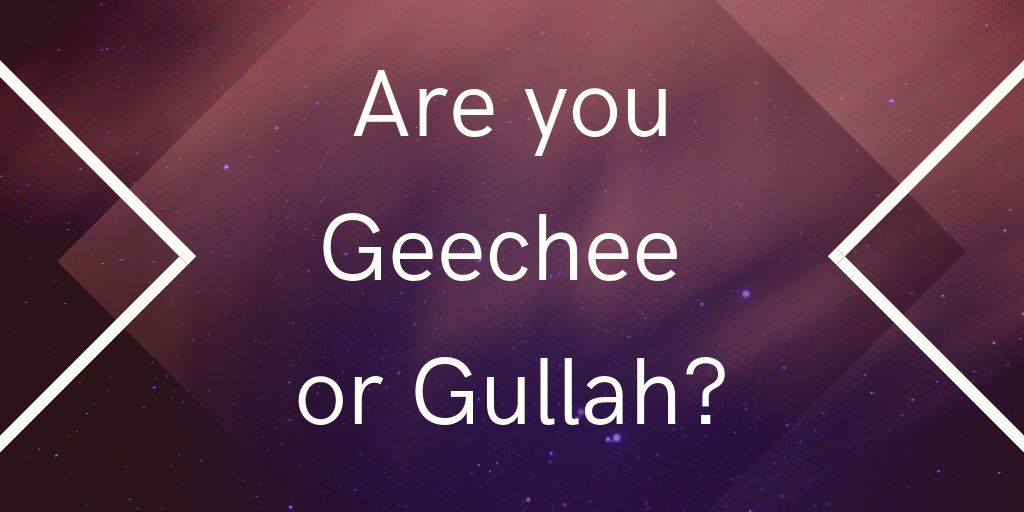 Are You Geechee or Gullah?

I was about 7 years old when I heard this woman ask my father, “You gwon Geechee ah Gullah?”

I grew up with a clear understanding the there was something different about the Geechee and Gullah people.  The distinction was often identified by the accent that didn’t sound quite Southern and didn’t sound quite Caribbean, but was uniquely a combination of both.  I could hear it in my mother’s voice when she got angry at one of us kids or in the coded conversations that I overheard between my father and uncle. I could see it in the profile of my grandmother’s face with clear Native American feathers and sun-drenched sienna skin, straight black hair with flickers of red that would glow like embers when the light hit her face just right.  The language and the culture was what I believe to be African-American with no rhyme, reason, or weight behind the history.  Kind of like being “just because”.  I didn’t consider the history behind the way my family spoke, or the way my family looked, or why my family did so many of the things we did.

At times, I couldn’t tell if being called Geechee (Gullah) was a compliment or a criticism, but I didn’t know enough to defend the ways of a culture that I didn’t understand – even though I was a part of it. In fact, I often denied that part of myself and besides – no one asked as I got older, so to me, it couldn’t be as important as being from Spain or Mexico or Germany with languages that were celebrated and seen as exotic and speakers that were considered bi-lingual. The language my family spoke at home was only allowed to be spoken at home. Outsiders saw our way of speaking as unintelligent, ignorant, and inferior. I know now that that is so far from the truth. Now, I try to educate any young person in my family with the information that I couldn’t share outside my own home while growing up.

The Gullah and Geechee culture on the Sea Islands of Georgia has retained ethnic traditions from West Africa since the mid-1700s.  The islands comprise West African decedents but are distinguished between Gullah (islanders in South Carolina) and Geechee (islanders on the Sea Islands of Georgia).  Early this fall, I took my Goddaughter to the Geechee Kunda Museum in Liberty County and to the Gullah festival held on Sapelo Island, Georgia to learn more about the history of my ancestors, the language of the culture, and the men and women who were enslaved on the coastal plantations that stretched from South Carolina to Florida.

The museum seeks to preserve the Geechee culture – an African-based culture that has developed in coastal Georgia. The museum is situated on former rice, cotton, and sugarcane plantations to honor the men and women enslaved on the land. An aura of respect envelops the entire property – in the front of the museum is an adobe hut, built to honor the Native Americans who had inhabited the land prior to the plantation owners.

The museum is run by Jim and Pat Bacote, who are leading the movement to preserve the Geechee tradition in the area. Jim and Pat lead us through numerous workshops detailing the history of Africans arriving to America from West Africa, the traditions that were preserved in America, accounts of slave life, and instances of civil disobedience carried out by the slaves. Each one was moving and incredibly thought-provoking.

One of the most emotional experiences from the trip was when the museum historians (Elders) outlined for us through a series of hands-on demonstrations the rich and robust economy that was developed from the slave trade. For many years, I thought that slavery was an issue of race. As I got older, I recognized that slavery was a matter of money, and that race became a convenient distraction as a result. The workshops and demonstrations reinforced that view. The Elders pointed out that there was no way the institution of slavery could have survived if the enslaved people didn’t have the necessary skills to work the land; that the slave traders intentionally went to an area of the world where people were dependent on the land – and chose them for that specific reason.

In another workshop, we learned how slavery contributed to the underdevelopment of the African continent. One of the museum Elders walked us through an exercise where we simulated the collapse of African communities from the slave trade. Each person represented a skilled tribe of 100 people, and we saw how integral each tribe was to maintaining a functioning inter-tribal trading economy.  We then watched the system break down as tribes were taken away and sold into the slave trade. The entire experience shook me; I had never really stopped to consider how the slave trade had stripped the fibers of what Africa could have been.  It was heartbreaking to follow the chain of events between the dehumanizing actions that took place hundreds of years ago to the injustices and class divisions that we see today.

We ended our day at the museum with a performance from the Geechee Kunda Performers – the “original shouters,” who introduced the Geechee Gullah language – a blend of English and African languages, that was born on Africa’s slave coast and developed in the slave communities of isolated plantations in the coastal South – through a very funny demonstration with an interpreter. They concluded with a song and dance and an open invitation for participants to join in! We danced and sang, paying homage to our ancestors who had performed these dances and sang these songs hundreds of years ago.

The next day, we took a ferry across Doboy Sound to Sapelo Island and joined the festivities of the Gullah Festival. It felt like the largest family reunion I had ever seen. There was food-a-plenty and it was so good!  The menu would not have been considered healthy, but it demonstrated the creativity and resilience of a people that were forced to make delicacies from the scraps of their slave owners.  History and storytelling were delivered on the porch of the only church on the island.  Approximately 115 people now reside on Sapelo, a community that is primarily composed of the descendants of slaves; their diminishing numbers are a source of concern. Cornelia Walker Bailey, the most prominent spokesperson for the community, has long been a champion of preserving the rich West African heritage, from spiritual beliefs and folkways to the Geechee dialect once spoken by the island’s African American residents. In 2000, Bailey published a “cultural memoir” of her life and the struggle to preserve these traditions.

What an honor and a privilege to share this time with my Goddaughter.  It’s my responsibility to help her understand that African Americans did not just “arrive” to America, and to make sure that she and all the other young people that I mentor know that there is culture and history that they come from and that it should never be denied.