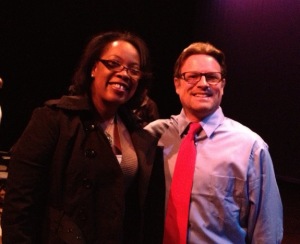 Through the nature of my work, I have been focused on “limitations of disabling condition”. Recently I attended a concert performance that challenged the viewer to consider conditions that some may see as disabling are merely “different abilities”.

On January 19, 2013, I attended a performance at the 7 Stages theater in East Atlanta, Georgia.  The main performance was entitled, TOUCH, presented by Full Radius Dance.  FRD is non-traditional dance company that includes dancers in wheelchairs. There was nothing about their performance that suggested outward functional limitations. With legs securely strapped to their chairs, dancers propelled their upper bodies into back flips  – WITH their chairs! (I know I couldn’t do that standing on my own feet!). Dancers in wheelchairs were graceful and powerful. They were just…. Dancers.

TOUCH is a dance performance that illustrated the strength of humanity through the power of touch. It began with a monologue by the Executive Director, Douglas Scott, describing how this piece evolved.  He stated that when he decided that he would no longer actively perform, he found himself leaving rehearsals with the dance troop feeling depressed and that he couldn’t understand why.  He stated that it was not the act of dance that affected him – it was the expression of humanity that he missed. The absence of the physicality of the human touch is what prompted him to choreograph the most profound performance I have ever seen (outside of Alvin Ailey J).

Face. Neck. Tongue. Fingertips. Feet…. All areas of the body that are the most sensitive to touch were repeated – almost subliminally – throughout the performance.  I was amazed at the precision of the dancers as they flipped and spun and swayed to rhythmic sounds that prompted the viewer to consider a somber world without…touch.