Where I grew up is the quintessential small town – Berryville, Virginia (yes, Berryville — my last name is Lemon and I grew up across the street from the Grapes).  My high school was small, with only about 100 people in the graduating class. Everyone knew everyone and it was a huge deal when a second traffic lite was installed and Subway came to town.  And even though I was ready to leave the second I graduated, I now recognize that it was a great place to grow up.  Berryville was the type of town where every Friday night you would find the town at the high school football game.

In high school I was a nerd and an athlete, I graduated top in my class and was on the academic competition team, but I was also a stand-out thrower (shot put and discus) on the track and field team.  After high school, I went to the College of William & Mary, where I also competed in track, throwing the hammer and the weight.  I was fortunate to be successful throughout high school and college athletics; I held school records, won state and conference championships, was the top point scorer, etc.  After college I left athletics behind and began my professional career — athletics was essentially all but forgotten, aside from my thrice-weekly boot camp class and the occasionally 5K. 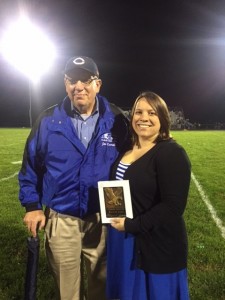 Abby after Receiving Her Award

This past summer I got a call from my high school track and field coach saying, ‘it has been 10 years since you graduated, time to get you into the hall of fame!’  What she was talking about was the Clarke County High School Athletic Hall of Fame.  Selection is based on achievements (both athletics and academic) during and after high school, and you must be 10 years removed from graduation.  She told me to mark Friday, October 9th on my calendar and wait for her call on August 15th to let me know if I had been selected.  Late on the 15th I got the call that I would be inducted; my father was thrilled and assured me he would be there as well.

The day before the induction, I began the drive back to my hometown. Living in Albany, NY meant the trip would be no less than a 7-hour drive (thank goodness for podcasts!).  The induction ceremony would take place at half time of the football game, preceded by an end–zone dinner of Berryville’s “famous BBQ.”  Prior to tha,t they arranged for me to tour the new high school (which was constructed about 5 years after I graduated).  After the tour I was a little jealous that today’s students don’t have to deal with the cramped hallways, slender lockers, and musty cafeteria, but I was also able to see a couple of my favorite teachers and view my discus record, which still stands and is displayed in the gym.  I was also surprised to see that my small hometown had grown – there are now five stoplights, a new grocery store, and the quaint downtown has exploded with numerous artisan shops.  All of a sudden, the small town I couldn’t wait to leave was looking more desirable. 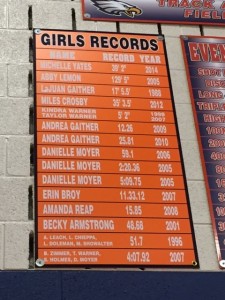 The football game was fun – the Eagles (my high school) beat their rival 27 – 0.  At half time, three of us (one posthumously) were inducted.  They read a bio on each of us, which listed our high school and college accomplishments, as well as where we currently live and what we do.  We stayed for the rest of the game and then I was fortunate to be able to visit with my best friend and her husband who had come up from Richmond, VA for the event.

It is a funny thing growing up in a small town, when you come back, all the sudden everything looks a little bit shinier.  Throughout the night people I had never met congratulated me, and I saw many of my classmates.  Overall, we were made to feel that being inducted was a really big deal, and I guess it was.  I think that if I still lived in Berryville I would be reveling in this honor for days to come, but instead I got up the next day and headed back to Albany – appreciative for the honor and the experience, but also excited to go home.