A Day in the Life…

Wednesday night April 15, I headed to the hotel in Albany to stay the night and head off in the morning to complete my Advanced Individualized Training (AIT) at Fort Rucker, Alabama.  There are about 50 of us staying the night at the hotel, and only two of us are female.  0430 am I get a wake-up call from the hotel and 0500 we are downstairs for breakfast.  As we head off, all of the people, except two of us going to AIT, were going to basic training.  All the males still have long hair and most still have civilian mentality.  We are then bussed off to MEPS down the road where we sit and wait to go through medical and finish paperwork (hurry up and wait).  The other girl and I get it easy, with less wait time because there is only two of us.  However, when it comes to height and weight, she fails tape so she cannot ship off to basic training.  Our boxed lunch comes and I am called aside to go to the airport early because I have an early flight.  I am bussed off again to the airport alone with only my plane tickets, food voucher, and an emergency number sheet.  I have two huge bags filled with all my military gear.  Without a packing list for AIT, I had no idea whether to bring civilian clothes or any toiletries, as I was unsure when I would be able to stock up on toiletries or whether I would be able to wear civilian clothes, so I brought minimal of both.

When I finally arrive in Fort Rucker, Alabama, there is only one terminal/gate at the airport, one bathroom, and no food places.  Everyone off the flight goes in their cars home. I am then alone in the airport carrying two huge 50-pound green duffels and a backpack looking around the airport for what to do next.  A man comes in from a taxi and tells me that there is no bus or car that picks up soldiers, and I will need to take a $50 taxi to the Fort Rucker base, which is a half hour away.  I get in the cab and we are on our way.  When I arrive at the base, I have no idea where to go and neither do the security guards, so the taxi driver drops me off where he has dropped off other AIT soldiers before.  It is now 2030.  The NCO on duty has no idea who I am or even that I was arriving today.  Confused, she has me fill out initial paperwork, hands me a room key, rolled bundle of sheets, and a green blanket.  My roommate had graduated that day and was leaving for her plane home at 0300.  I am told formation is at 0600 and am showed to my room.

Two weeks after we arrive, on April 29, we finally start class. Weekdays at 0540 we are expected to be formed up outside on the PT field.  We do the same warm up drills everyday followed by either 30/60 sprints, hill sprints, kettle bells, or conditioning drills and then a warm down, pep talk, soldiers creed, army song, aviation song, and then are finally dismissed by 0700.  Covered in sweat, mud, dirt, and bugs, we have until 0745 to have showered, eaten breakfast at chow hall, gotten our school bags and be formed up.  We then march to class from 0800 to 1200, march to chow at 1200, march back to school house at 1300, form back up at 1700 and march back to dinner chow.  Finally after dinner chow we are allowed personal time from 1700 to 2000.  During this time you can go to the gym or hang in your room (which has no Wi-Fi).  If you are phase 5 (passed a written test, ASU inspection and gear inspection) then you are allowed to wear civilian clothes, go to PX, or eat at Mother Ruckers restaurant. 1945 we are formed up again for bed checks where we are briefed on special instructions for the next day and given a safety brief.  Finally we are locked in our barracks until we wake up for PT and do it all over again.

There were three types of soldiers in AIT with me. 3rd platoon (my MOS) are 15P – Aviation Operations Specialists.  Our training was eight weeks.  2nd platoon were 15Q – Air Traffic Controllers, and their AIT is 14 weeks. 1st platoon, 15-H, Aircraft Pneudraulics Repairer whose AIT is 12 weeks.  We had the biggest platoon with about 100 people, 2nd platoon had about 30 and 1st platoon was the smallest with about 20 (only 1 female).  We were separated by the colors of tape on our camel backs.  1st platoon was blue, 2nd was green, and 3rd was red.   Overall we were all there to train and graduate.  On June 19, my class 15-024 graduated and received our aviation wings! 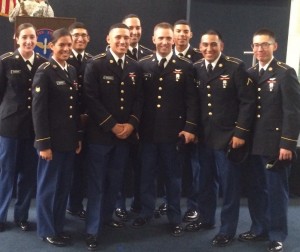 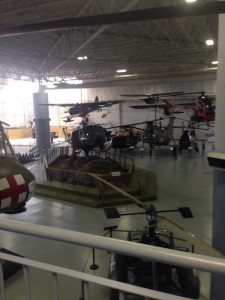 Fort Rucker houses the United States Army Aviation Museum – where our graduation was held.  The museum has 50 aircraft on display

We were selected to be a part of a parade in neighboring town of Geneva, where we also did a 5k and attended town festival