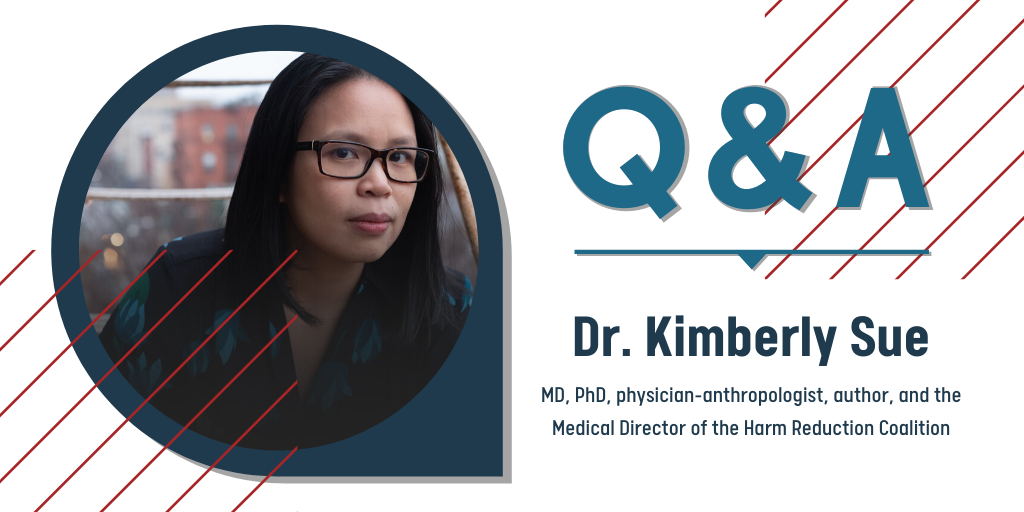 As medical director of the Harm Reduction Coalition and an attending physician in New York City’s Rikers Island jail, how do you see jails and prisons failing women with opioid use disorder?

Women increasingly are disproportionately represented in local and state jails and prisons, even though the overall rate of women in jails and prisons continues to be pretty low. Some people have called this the feminization of the war on drugs.

Women with opioid use disorder have very specific needs. Often, they have significant histories of trauma and comorbid mental health issues. In some cases, women are maintained on opioid agonist therapies, such as buprenorphine or methadone, which is the community standard of care, if pregnant while incarcerated, and then are forced to undergo withdrawal or taper off these medications after delivery – even though we know that drug-related deaths remain one of the major causes of postpartum mortality for women in this country.

We also know that women with substance use issues are very connected to their communities and to their families. It doesn’t make sense to take them out of these networks to incarcerate them, with the risk of significant ongoing additional trauma from separation, rather than providing comprehensive solutions in the communities in which they live.

What inspired you to begin working at the intersection of the criminal justice system, addiction policy, and mental health and drug treatment?

I think that mass incarceration – some academics called it hyper-incarceration – has historically had racist and xenophobic underpinnings. The “War on Drugs” has always had some other person to fear, and that generally has been people of color who have largely been criminalized for this.

As a Chinese American woman, and as a doctor, I really see myself working at this intersection of institutionalized racism, mass incarceration, reproductive justice, and gender. It’s one of the most pressing issues of our time. I really wanted to apply the lens of scholarship and deep theoretical and empirical thinking to why we continue to have policies that lead to harm and death. I work at these intersections because I feel that we need to both zoom in and zoom out on the patients that I have in front of me, to understand their overarching life stories and the policies and social conditions that have led to those life stories. To treat the downstream issues, but look upstream, as well.

In your work with women with opioid use disorders who have returned to the community from prison, do any stories stand out that demonstrate the tremendous barriers these women face. Conversely, are there any stories that remind you of the hope available to women in this situation?

Women’s lives after prison and jail are just unbelievably chaotic. They are stressed by very tenuous and fragile relationships that have often been damaged by their substance use. They may have no steady place to live, and they might not have health insurance. They typically have no job and bleak job prospects. They may or may not have access to their children. The partners to whom they return often have been emotionally, verbally, physically, or sexually abusive.

Typically, there’s not a lot of communication between prison and jail medical staff and community partners. People are shown to the door. I remember one woman I got to know who had a community treatment program lined up for her when she left. But she had accumulated time off for good behavior and was released a week early, forcing her to miss the opportunity to have a place to live and get treatment she wanted and needed. She ended up homeless.

It’s hard to cultivate hope and to build people’s strength in spite of all of the barriers that they face. Yet, people manage to take care of themselves and each other without medical care, and within communities that have often been left for dead or abandoned by society.

I remember one woman named Serenity who was told in treatment and recovery programs to avoid certain people, places, and things. But this was really painful for her, because these were the people that took care of her when she was forsaken and left for dead. There were many small ways in which they looked out for her.

I think trying to figure out ways that we could pay people for their expertise and their natural strengths would be wonderful. Women leaving jail often have criminal records that prohibit them from obtaining jobs in the formal labor economy but very much want to help and care for others

What’s your vision of the future for incarcerated women with opioid use disorder?

My broader vision is that we don’t incarcerate people with opioid use disorder, period. Having worked in the community and in jail settings, I can really only testify to a litany of harms from incarceration of people with substance use problems. It’s quite an ineffective policy, and it’s a very expensive social policy that has a lot of significant moral, ethical, and human rights questions attached to it.

Medicine is part of that, but it’s only a small part. A lot of it has to do with community connections. Love. A sense of purpose. Some kind of spirituality. Just giving people some respite from lives of chaos. None of those things are available in prison or jail settings. Then, we wonder why they don’t work to heal people.

I took care of someone I met in the syringe exchange program who was sleeping on the number six train. She’s now housed, and she’s been approached about getting a job. I just took her to the Columbia University Vagelos College of Physicians and Surgeons to teach and lecture to the first and second-year medical students. There’s a lot going on in her life, but what I’m able to do for her in the community is leaps and bounds ahead of what I’m able to do for her in jail

You wrote your book, Getting Wrecked: Women, Incarceration, and the American Opioid Crisis, from the perspective of a medical anthropologist. How did your experiences as a doctor and as an anthropologist affect your approach to the women you interviewed?

Taking that lens and those methods to heart, I sought to understand how women with opioid use disorder and histories of incarceration understood their experiences of both incarceration and addiction, and what happens to them when they leave jail, prison, or treatment settings. Women exist and live and thrive and suffer in all kinds of spaces that we never would normally access.