Celebrating Life among the Dead

I was so very unhappy with my previous office in the West Village of New York City. While a student at Stuyvesant High School in New York, I fell deeply in love with the West Village. Whether it was the diversity of the blocks that comprise the West Village; the outdoor cafes where we were not carded, or simply going to Unique to buy my latest pair of fashionable British Walking Shorts, I mourned these and many more losses. Everybody and everything looked the same and the $5 cup of coffee reflected the growing affluence of the neighborhood. So when the opportunity to move into another space came, I had very specific requirements. I wanted to work in an economically, ethnically, and racially diverse community. I also wanted to work where I could find an old-school shoe repair shop, a reasonably priced cleaners, and, most of all, that $1 cup of great coffee.

I got a call about an office that was available on a floor operated by the Astoria Historical Society in Queens, New York. I quickly made arrangements to visit. I was a little surprised by the name on the front of the building, “The Quinn Funeral Home,” but I figured that like many old funeral homes, it had been repurposed into office space. Bob took me on a tour, reminisced about old New York, and in passing mentioned that the first three floors of the building was a funeral home.

He assured me that the building was “quiet,” and that I would not come in contact with any bodies being delivered to the funeral home. I carefully weighed the costs and benefits of working in a funeral home, and decided that the vibrancy and liveliness of the neighborhood outweighed any concerns that I had about working among the dead. However, I did not really realize the life lessons that I would learn working in a funeral home. 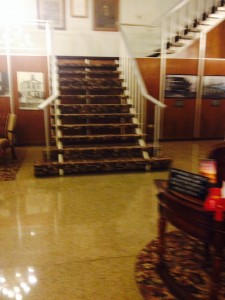 First of all, it’s a great conversation starter on first date. Secondly, it is very quiet. But most of all, I have learned about the reverence with which all cultures hold their dead relatives and friends, and the differences in how different cultural groups mourn. I try very hard not to make generalizations about groups of people, but it is true that we all have different rituals in how we honor and mourn our dead. Some groups don’t try to hide their tears, while others (at least initially) appear very stoic about their losses. Others come to services in large family groups, while others drip in one by one…alone.

I have learned not to try to avoid seeing others in pain while mourning their losses. I have also enjoyed overhearing stories, like the one about the man who was buried with his New York Yankees cap or the discussion about who was the deceased’s favorite granddaughter. I have become a more astute observer of both life and death while working in the funeral home. After all, death is a part of life.

So I no longer feel the need to recast where I work. When I met a friend for lunch last week she had some difficulty figuring out exactly where I worked. When I mentioned the funeral home, she immediately knew the building that I was talking about.

Life is so funny sometimes. We learn lessons in the least likely of places. I have learned that honoring the dead includes honoring the living, and that it is okay to cry when you lose someone you love and not care about people’s reaction to your grief.